This week saw the launch of the Road Worlds for Seniors at Cherry Garth care home in Buckinghamshire.

The bikes are provided by Medicotech, with software developed by Motitech to ensure the cycling is engaging and enjoyable for residents. 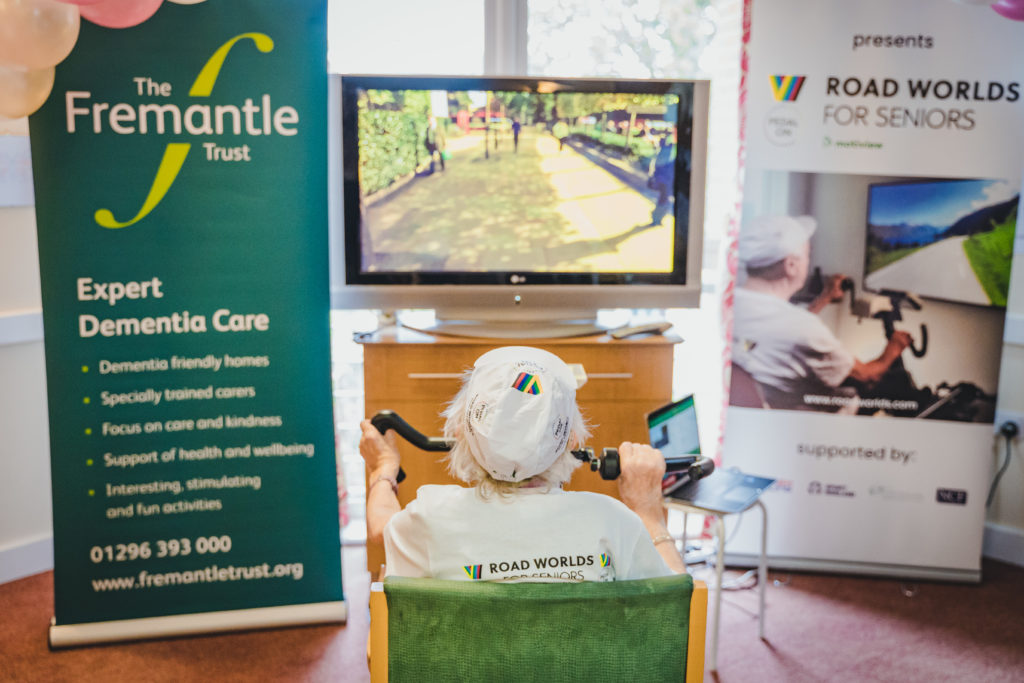 The bikes themselves are designed to cater to any residents’ needs. Residents can sit in an ordinary chair and pedal, holding onto the handlebars so that it feels like riding an ordinary bicycle. For those with less muscle strength or mobility, the bikes can pedal for the user, building muscle gently, or any of around 15 difficulty settings can be chosen for residents with more strength.

The separate video software, which displays a cycle route on a screen as the resident pedals, was developed in Norway by Motitech. Stian Lavik, Chief Business Officer, stated, ‘I wanted to see bikes in care homes, so we began to make videos to make it more engaging.’ The videos were originally filmed around the care homes in Norway that were using the bikes, but as popularity increased, the team was given more ideas for different areas to film. The software now has over 17,000 scenes that residents can ‘cycle’ through and this figure is getting bigger all the time.

Stian continued, ‘We are always inspired by the people who are using the bikes. One lady had a niece who had moved to Singapore, so we filmed videos of Singapore and the resident told her niece, “I’ve seen where you live now,” – we are helping people with their fitness, but also to connect with others.’

Kicking off the UK’s Road Words for Seniors, Cherry Garth, a care home for people with and without dementia which is managed by one of this year’s NCF Rising Stars, Kelly Hartley, hosted a ceremony with attendees from across the sector. Vic Rayner, Executive Director of the National Care Forum was invited to cut the ribbon. She expressed how fantastic it was to be a part of something taking place across the whole world and encouraged residents to ‘pedal on’.

The first on the bike was Eileen Leighton, who is due to turn 100 next week. She was able to re-live her days riding in tandem with her husband, and chose to cycle around London to the tune of Daisy, Daisy, including going down a small street she had previously worked on.

Last year’s Road Worlds for Seniors championships saw a total of 52,000km cycled in care homes across the world. This year, six countries are participating, with 4,000 participants and 200 teams so far. Between 50 and 60 of these are in the UK. To get involved, contact Stian Lavik at Motitech, email stain.lavik@motitech.no