Ben Hartley analyses the provision of ensuites and wetrooms in UK care homes and draws some interesting conclusions.

It is said that, apart from death and taxes, the only certainty in life is change – a truism, for sure, but one that warrants some reflection when we consider how society thinks about the way we care for our older people, and particularly in relation to residential settings.

Before launching into the research I’d like to draw comparisons with the hotel and guesthouse sector. It’s not that long ago that ensuite bathrooms in hotels and guesthouses were a dream for the future. Today, they’re as standard as the beds in the room.

Residential care for older people though might not be keeping up with the ablution revolution, which was our starting point in deciding that there needed to be some in-depth work to establish the current position.

We embarked upon a thorough and extensive research project, carrying out a comprehensive survey over six months involving more than 6,000 telephone interviews. It reveals a very interesting picture. The research includes data from the whole of the UK and comprises information from private, not-for-profit, local authority and some NHS care homes.

Where we were unable to contact a care home directly, we made a number of assumptions based on data from other sources including the A-Z Care Homes Guide and the Care Quality Commission. The principles of what we did and why are relatively easy to convey. The detail, however, is trickier and, unless you are a stats lover, a little less inspiring.

For the purpose of this research, we describe an ensuite bedroom as one where there is at least a WC and wash hand basin. Such a room may also provide, though this is not a requirement for the purposes of our definition, a shower cubicle, bath or wetroom.

By contrast, our definition of a bedroom with an ensuite wetroom is one where there is a full wetroom, i.e. a walk-in shower complete with level access as well as the WC and wash hand basin. In effect, this is a subset of the ensuite bedroom provision – simply characterised by a higher level of facility.

We know that care homes aren’t keeping pace with the rate of change witnessed in hotel stock, however, although we knew that provision was more limited, the findings have shown an even bigger gap in provision than anticipated.

Our hypothesis was never going to be one-sided. We knew that there was still a large segment of the sector where wetrooms are not provided, but it is the full extent of this quality gap – if I can call it that – that wasn’t apparent before we undertook the research.

Another factor we did not see was the extent to which the national average masks some considerable variation amongst the regions. I hope this research might provide operators with some useful guidance as to where opportunities for improvement exist.

The first interesting result shows that in the UK, the overall provision of wetrooms in our care homes is approximately 14 per cent of total registered capacity, although, as alluded to above, this varies enormously from county to county, town to town and country to country when analysed in detail.

As can be seen in Figure 1, Scotland has the highest provision of wetrooms overall with 19 per cent. This is compared with Wales, which has the lowest provision at 5 per cent, England with 14 per cent and Northern Ireland with 10 per cent.

The number of ensuite bedrooms also varies from country to country, with Scotland again delivering the highest proportion of 75 per cent, considerably higher than the national average of 62 per cent.  Northern Ireland has the lowest ensuite provision at 34 per cent, Wales has 44 per cent and England delivers a 63 per cent provision.

Figure 1 – Percentage of Ensuite Bedrooms and Wetroom Bedrooms by Country 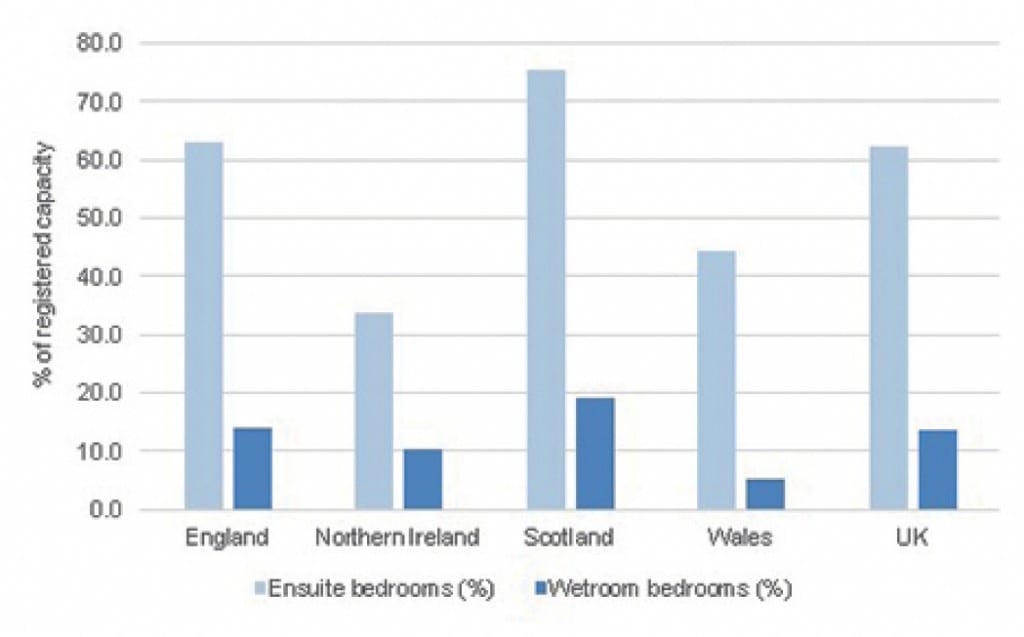 When this is broken down further by Government Office Regions (GOR), (Figures 2 and 3) there is a wide differential from region to region. The disparities are due to issues such as wealth, population density, the number of new build developments and regional planning policies.

Some key points to note include: 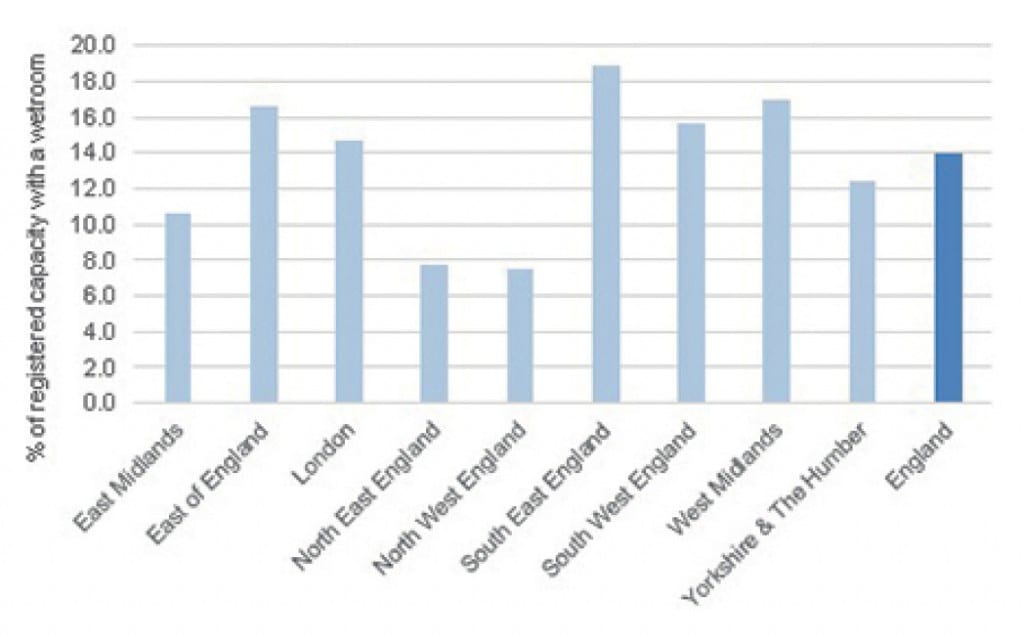 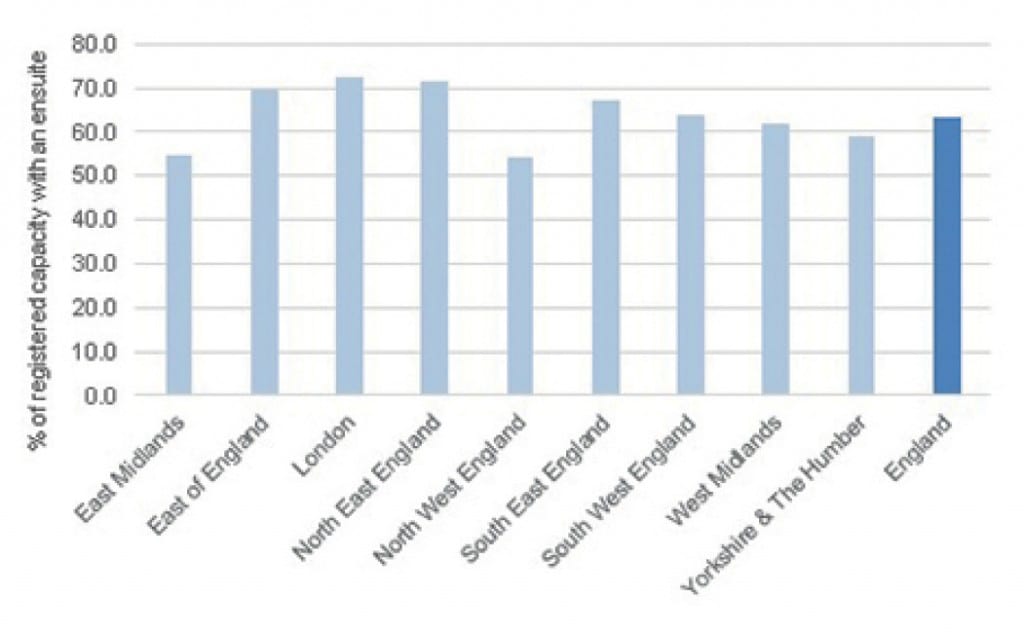 When reviewing the overall UK data, the maps (Figures 4 and 5 overleaf) demonstrate clearly that Scotland has the highest percentage of both ensuite and wetroom provision.

Scotland also has the highest percentage of local authority homes with ensuite wetrooms. In addition, the standardised baseline fee rates across the whole of Scotland have made it attractive to developers and operators in comparison with other parts of the country, which have seen reductions or a freeze in baseline fee rates. 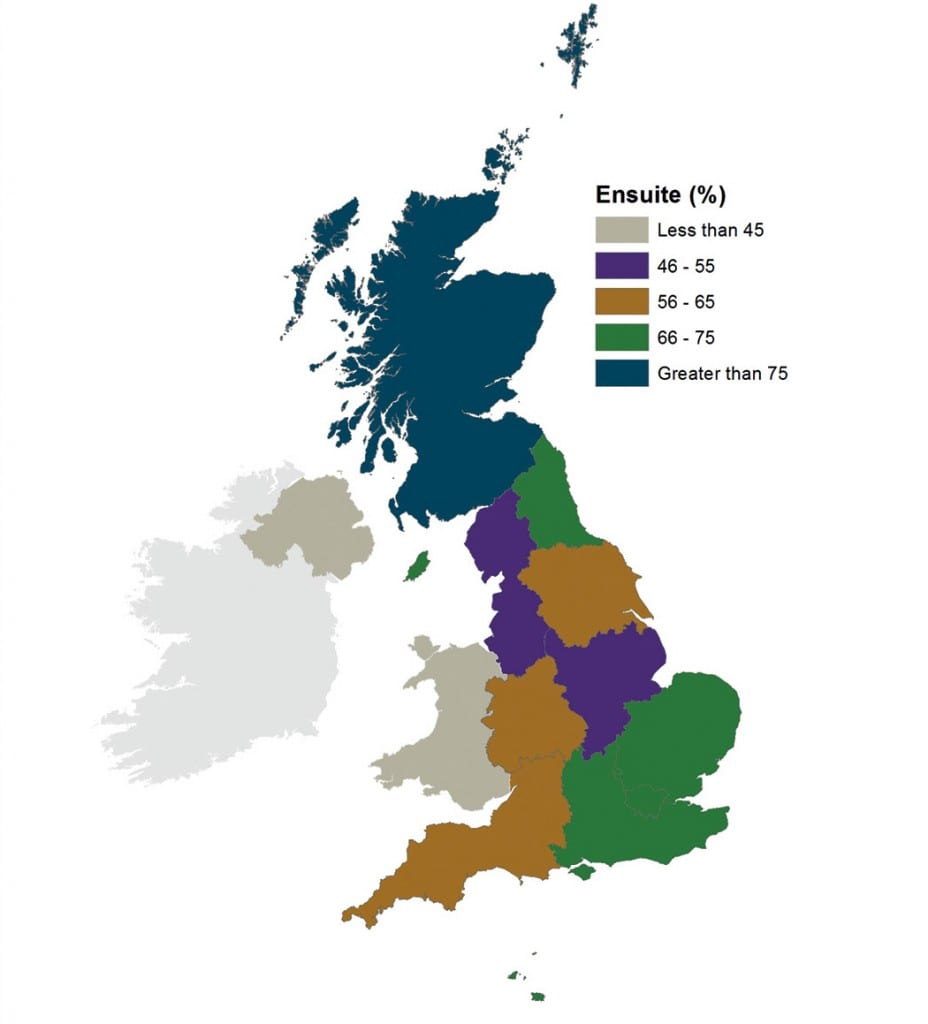 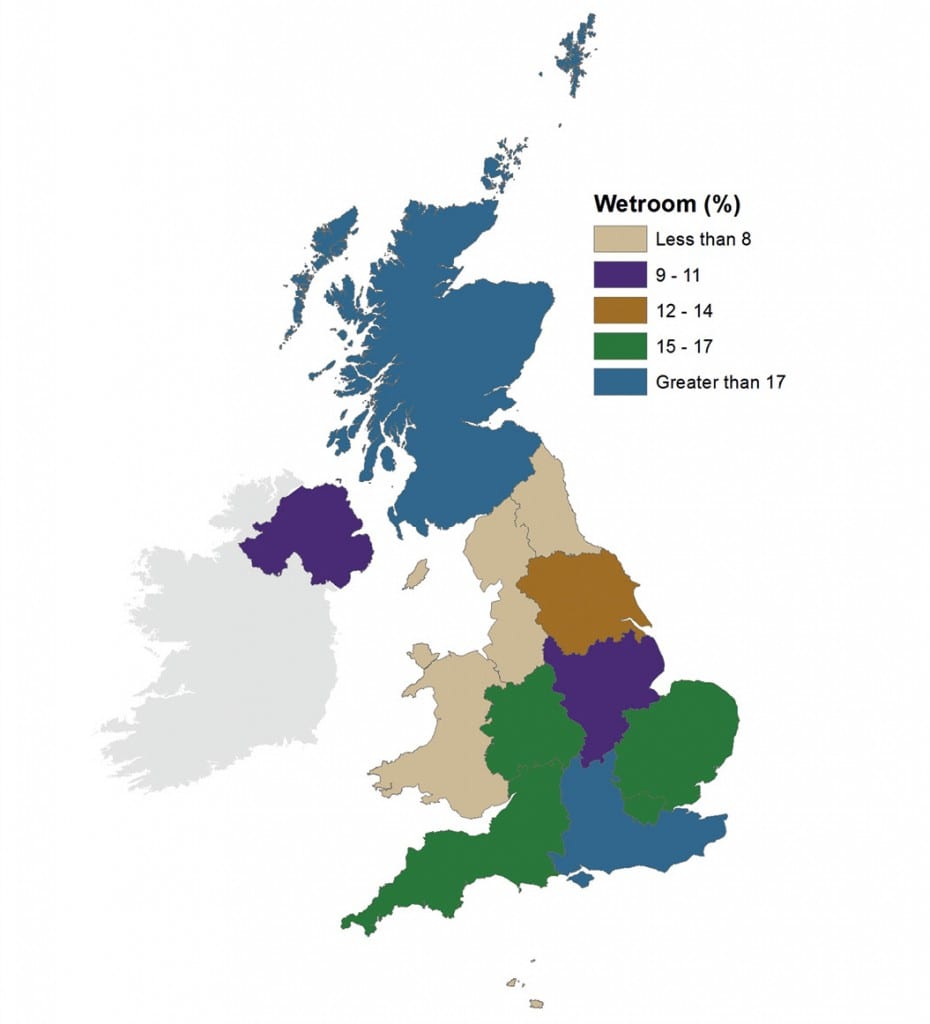 According to the research, it appears that new builds increasingly contain, or are set to contain, wetroom facilities. In the last three years, over 95 per cent of proposed elderly care homes for which we undertook feasibility studies have incorporated wetrooms in their design. We anticipate that this trend will continue. We are also seeing the size of wetrooms increase. Five years ago wetrooms were in the order of 2.5 sq. m, but this has now increased to 3.5 to 4+ sq. m.

We do not see provision of ensuite wetrooms increasing significantly in areas such as the North East and North West of England, unless there is an increase in baseline fee rates, which given the current local authority constraints is unlikely.

There is also an increase in the number of operators looking to reconfigure existing accommodation to incorporate wetrooms. Much of this comes from operators with fewer than five homes, offering a very high standard of personalised care, who consider that providing an ensuite wetroom will ensure their services are fit for purpose. 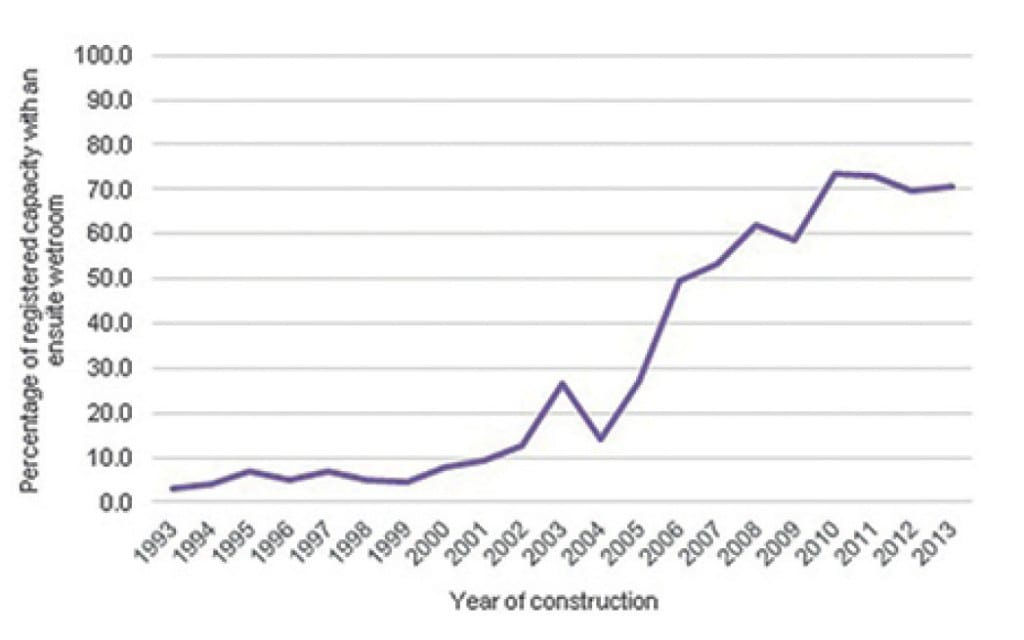 Analysing this further, we looked at historic building data over the last 20 years. The results in Figure 6 show a large increase in wetroom provision from 2002 (with a slight dip in 2004 and 2009) until 2013.  From 10 per cent in 2002, this has increased significantly to 70 per cent of all new builds in 2013; a 60 per cent increase in 11 years. We anticipate the proportion of wetroom beds to increase further over the coming years to fulfil market and consumer expectations.

Our research enables us to drill down to the individual settlement, and the local disparities are particularly noticeable at this level. Only 13 post towns in the UK have a 100 per cent wetroom provision, with some 612 postal towns having no wetroom provision whatsoever.

The levels of wetroom provision are probably lower than most of us expected, but they conclusively reinforce the opportunity for developers and operators to develop this important feature in future care homes. This will improve the living standards of all those who occupy them.

As for those providers that operate facilities without ensuite wetrooms consider this: every March and September many are struck by the number of newly-registered cars on the road. However, there are a larger number of older vehicles that continue to transport their owners successfully from A to B. Whilst most of us would like the newest cars with the flashiest gadgets, what ultimately matters is the roadworthiness of the vehicle we are driving.

Physical facilities matter in care homes, but it is the quality of care on offer that will always be the most important factor.