Download eBook
Q. With an imminent General Election, how has social care fared under the Coalition Government and what do the different parties propose for the future of the sector? A. Richard Humphries, Assistant Director, Policy – The King’s Fund responds.

Social care wasn’t a big issue in the 2010 election campaign; cross-party talks about how to pay for it ended in an acrimonious political row about the Conservative’s ‘death tax’ poster. But the sense that something had to be done about social care returned after the election with some specific pledges in the Coalition’s programme of Government. The centrepiece was a commitment to establish an independent commission to consider how to pay for care.

Nearly five years on, how has social care fared? Arguably, the Coalition has made more progress in five years than the previous Government did in 13. The independent commission, chaired by Andrew Dilnot, reported within a year. To the surprise of many, his central recommendations were not only accepted but also embodied in legislation that will be implemented from April 2016.

To make any headway at all on an issue that has eluded all previous attempts at reform – and in the toughest fiscal climate in living memory – is a big achievement. It establishes a symbolic milestone in social care policy – that the State places a limit on how much the individual should pay for care and extends to care and support needs, the protection from catastrophic costs that we have always enjoyed for health care needs. The Coalition should receive credit too for the most comprehensive and ambitious overhaul of social care legislation since 1948. The way that the Government has engaged with the sector and its stakeholders to ensure the passage of the new Care Act is a model of good practice in policy development that contrasts sharply with the experience of the Health and Social Care Act. To consign the 1948 National Assistance Act to the history books is an achievement of which any modern Government could be proud.

However, the Coalition has undermined much of the good it has done by deciding in the 2010 Spending Review to protect NHS spending from real-terms cuts but leave social care exposed to the impact of a 40 per cent real-terms fall in financial support to local government. The transfer of some NHS funds has helped a bit, but not enough to prevent a 17 per cent fall in spending on social care for older people (see figure 1). 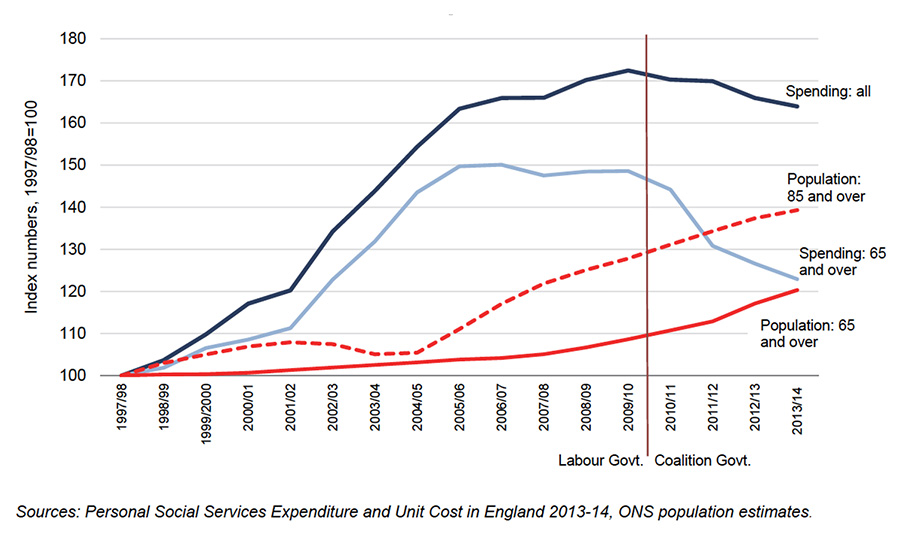 The sharpest service reductions have been in community-based services, like home care, that are vital to supporting people at home and avoiding admissions to hospital and long-term care. Since 2009, 25 per cent fewer people are getting publicly-funded social care.

Cuts on this scale to most other public services would elicit political and public outrage. It seems ironic that, although the Government has given priority to protecting universal benefits for older people (such as winter fuel allowances) irrespective of need or wealth, it is older people who arguably are least well-served by the sharp deterioration in access to essential care and support. Public spending on older people is not coherent.

As the financial ratchet on local government tightens, doubts grow that the Care Act will be adequately funded. The funding reforms will be complex to administer and hard for people to understand. In the absence of accompanying action to address the underlying funding position, relatively few people will benefit from the changes. As the gap between demography and resources continues to widen – to an estimated £4.3bn by 2020 – the National Audit Office is right to warn that no-one knows how much longer services can carry on absorbing these pressures.

In the meantime, the deepening fault-line between universal NHS care that is free at the point of need and social care that is rationed to people with the highest needs and lowest means is not sustainable. That is why we, at the King’s Fund, endorse the recommendations of the Commission on the Future of Health and Social Care in England for a new settlement in which there is a single ring-fenced budget for social care as well as health.

The Election and party policies

As the election draws closer, the NHS may attract the loudest political noise but recent pressures in emergency care have highlighted the crucial inter-dependency of social care and the NHS. The coalition has done well to pass the Care Act, but bigger change is now needed. In an ageing society social care has become too important to play second fiddle to the NHS.

As the election is very near, the main political parties have announced policies relating to health and social care. Although specific manifestos haven’t been published at the time of writing, a brief roundup of the main parties’ policies is below.

Richard Humphries is Assistant Director, Policy at the King’s Fund.

Log in to read the reports mentioned in Ric