Stick or Twist?
Can you afford to sit still in a changing market?

Download eBook
Chris Tarry explores funding and regulatory pressures and asks whether providers can afford to remain the same in a market that is changing so rapidly.

There are many adult social care professionals who believe that parts of the care home sector are on the brink of collapse, and that current levels of provision cannot possibly be maintained, given static, or falling, levels of income into the system.

Pressure on the sector

A combination of social policy shift and economic conditions has led to a situation where many private owners face a bleak future, in particular those with a large reliance on publicly-funded placement. For these owners there is the constant struggle to balance a high level of fixed cost (necessary in order to provide even minimum levels of care) against diminishing incomes. In many cases, this is exacerbated by a significant debt burden. The pre-2008 boom period left behind a legacy of debt that is fast becoming unsustainable in an era of austerity. Local authority referrals, always a significant revenue stream for the sector, have declined in number and value. The overarching strategy for public social care no longer involves large block placements. The development of new technologies and new services, along with a determination on the part of central Government and social services departments, across the country, to produce a real shift in the way care is commissioned and delivered, has led to real change in the adult social care landscape.

There are those who have been able to survive and adapt, and there is still a flourishing high-end market. But even giants of the sector, such as Southern Cross, found the new economic reality impossible to stand up to. At the lower end of the market, where publicly-funded beds make up a significant proportion of, or in some cases all, income, the situation is becoming bleaker, and this has led to an increasing number of closures. The tragic story of two Lincolnshire care home owners committing suicide before they had been due to tell staff that their home was to shut underlines the desperation that some will inevitably feel. The knock-on effect is the pain and anguish suffered by residents, through the uncertainty and upheaval that closure, or the threat of it, brings.

The situation can be summed up as follows:

Debbie Le Quesne, Chair of the West Midlands Care Association, which represents several hundred owners, sums up the dilemma for her members when she says, ‘Many have developed businesses based on their local authority placing people into their homes at adequate rates. However, the industry has now changed, and local authorities aren’t placing in the way they did. On top of this, the rates they are now paying are no longer even adequate. Many owners are struggling to make ends meet, but at the same time they need to change the way their business works and appeals to the market. It is difficult for many to come to terms with.’

The situation begs two questions. Firstly, can those home owners, who have been traditionally heavily reliant on publicly-funded placement, begin to alter their business model? And secondly, are they willing to make the mindset leap needed to accomplish the sort of changes that may be required?

Common sense alone suggests that the status quo cannot remain, without resulting in a downward spiral of care. The ‘do nothing’ model will lead to slow decline. We are now faced with an industry where, unless there is a radical shift of emphasis by some owners, there will be a rash of business failures over the coming years.

Much of the problem lies in the fact that the sector is not traditionally marketing-led. Owner and operator focus has traditionally been inward, not outward, looking. The provision of care, and the logistical demands it imposes on a business have been the core business driver, rather than a desire to ‘sell’ to the marketplace. Many owners who thought their income stream was guaranteed and who borrowed pre-recession to develop their business on the back of that assumption are now facing a difficult future. Ill-equipped and poorly-resourced to cope with an industry where less and less is ‘guaranteed’ there is a desperate need for fresh impetus.

Of course, change is difficult and often slow to achieve an impact, particularly on the bottom line. However, we now have an industry where unless there is a radical shift of emphasis by some owners, there will be a rash of business failures over the coming years. For many the problem will become a lack of clear thinking as they concentrate on fire-fighting. The crucial first question that owners should ask themselves is, ‘am I willing to change things?’ If the answer is ‘no’ then there are different routes for an ailing business to consider including closure, sale or merger.

For those answering ‘yes’ it might be useful to illustrate one way the thought process might flow from that decision (Figure 1). 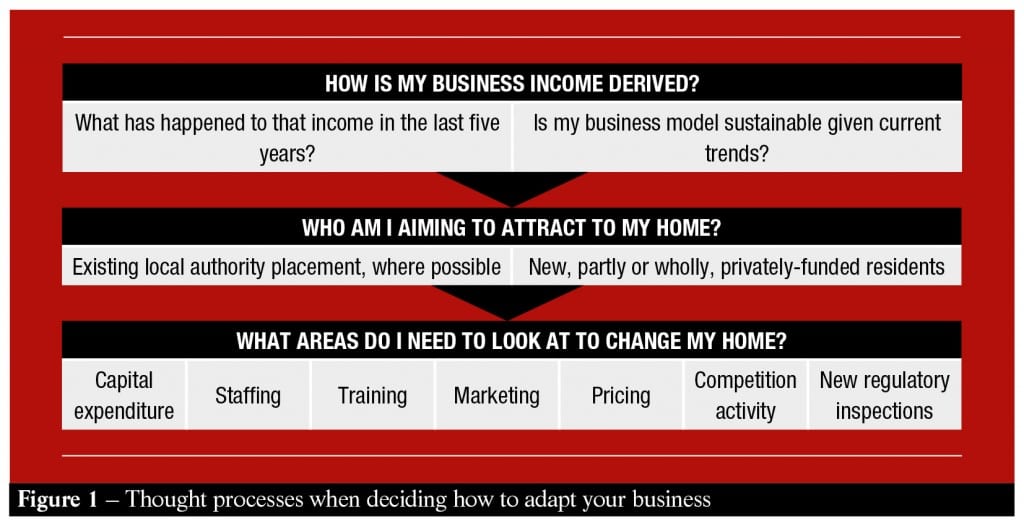 The seven areas along the bottom of the figure can all seem daunting to an owner not used to thinking about the impact they make on the potential resident or their relatives, ie the marketplace. Within each of them there are many follow-on considerations that will impact towards the regeneration of a business. However, not only are economic pressures making this necessary, but public expectation and regulatory change are also driving forces.

In recent years, the public has been bombarded with care home abuse scandals, a sector in crisis, large scale closures and the like. They are more aware, informed and their demands are growing. The decision they make about placement of a relative is highly stressful; there is a natural desire to get it right. That pressure transfers onto homes to deliver more than just minimum standards. Complacency is no longer an option; making the right impression is of paramount importance if an owner is looking to attract revenue from new sources.

This is also true in relation to the regulatory change that is coming. The CQC has announced its new criteria for judging a homes’ performance, and a new rating system to go along with it. When it is fully rolled out there is bound to be considerable fanfare that the public will take notice of. It is crucial that owners take on board the shifts in emphasis that the new inspections will bring. Five key questions form the bedrock of the new system:

Is the service safe?

Is the service effective?

Is the service caring?

Is the service responsive to people’s needs?

Is the service well led?

In order to reach these conclusions there is going to be much greater interaction with the public experience. There is clearly a desire to move away from a system with a ‘tick the box’ process driven mentality, towards one that takes into account real experiences and real views. There are now to be four gradings, with nothing between ‘good’ and ‘needs improvement’. In other words, if you’re not good, then you need to change. Home owners will need to shift their focus accordingly. Andrea Sutcliffe, Chief Inspector of Adult Social Care, has said, ‘To make sure that our regulatory approach is truly personalised I want us to consider for every service we look at – is this good enough for my Mum (or any other member of my family)? If it is, that is fantastic. If it’s not then we need to do something about it.’

Making an objective evaluation of your own business is often difficult. It requires a detachment that, very often, is hard to achieve. Debbie Le Quesne from West Midlands Care Association summed it up, ‘Many of our owners don’t know where to start to make change. Our job is to stimulate the thought process. We as a care association need to help them achieve those changes that will hopefully ensure their businesses continue, despite the rapidly shifting social care landscape.’

This is not the time for an ostrich, head in the sand, mentality. Commissioning strategy for adult social care has changed massively over the past decade. Owners who ignore that change, and who don’t make changes of their own, face a very uncertain future.