Business Clinic
Stepping down – supporting people back into their community

Download eBook
Supporting adults with learning disabilities to have equal opportunities, understand their rights and be in control of their own lives is on everyone’s agenda. But for individuals, providers and families, it can be hard to know whether someone is ready to move back into the community. As a potential solution, Heathcotes is using ‘Pods’ as a step-down service from their care homes.

Heathcotes operates a number of residential services for people with learning disabilities. Many of these homes have large gardens that often go partly unused.

Some of these gardens have been fenced-off to create a more manageable space, but the organisation had long been looking for a solution to make these areas into practical, usable parts of the service.

The idea for the Pods came about when a remote office was required at one of the care homes. The only space available to build this was in a corner of the garden.

Heathcotes worked with architects to design a building that suited the garden setting without making it look spoilt, but which was also practical and functional.

The outcome was a success, with an office that suited the service’s needs. It occurred to Heathcotes at this point that the design they’d used could be adapted to provide living accommodation in the unused garden spaces, and the concept for the Pods was born.

What is a Pod?

Pods are designed as independent living spaces, where residents who are thinking of moving back into the community can live for a time until they are confident about managing outside of the home.

The Pods enable Heathcotes to provide a full care pathway and are used as a stepping stone to enable further independence. The resident is still a part of the home and has as much support as required, but lives in the Pod which has its own bedroom, bathroom, living space and kitchen. The person is then supported to build their independent living skills in this environment while they prepare to move into the community.

The Pods are either registered as supported living or as a variation on the home’s original registration, depending on the commissioning need in the local area.

The idea is that the amount of support the person receives and the amount of time they live in the Pod for can vary according to each individual’s needs. For some, this can be intense support, lowered over a period of time; for others, this may be minimal support before furthering their independence. 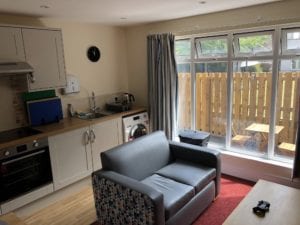 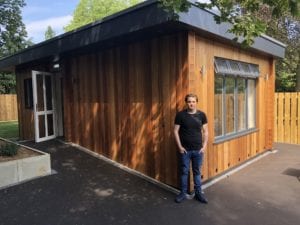 Seeing the potential in the project, Heathcotes conducted a full assessment of all its garden spaces to identify where Pods could be matched with a need for this type of accommodation. It has now begun to build them across those services in which they can be used.

One Pod has been completed and is currently in use and another three are already under development.

Heathcotes is also working with operational teams, families and external professionals, including social workers, commissioners and community nurses, to identify individual service users who may benefit from the Pods setting. This will only include people whose long-term goal it is to step down into the community.

Individuals for whom it is suitable and appealing will be supported through transition from the current service into the Pods and will likely live there on a time-limited basis. Where possible, Heathcotes is aiming for individuals in a service to move into a Pod on the same site, or at a nearby service, to allow familiarity with staff and the local area to continue.

So far, the project has been smooth-sailing. There have not been any issues with planning permission to date and staff, service users and families have all been receptive to the initiative.

The Pods are still in their very early stages, with one individual currently residing in the first Pod, but they are seeing positive results.

Rebecca Wright, Senior Commissioning Manager at Heathcotes said, ‘The service user currently residing in the Pod has settled in very well and has continued to build on independent living skills whilst still benefiting from the social aspect of living in the home, with the Pod being in close proximity of the residential service.’

Rebecca went on to comment on the outcomes they have seen in this case, saying, ‘This has been a very positive step which has been evidenced by a significant reduction in previous behaviours. For this individual, living in the Pod has had a notable positive impact on their self-confidence, independence skills, drive, determination and their general happiness and wellbeing.’

Although it is a new project, Heathcotes has established the outcomes it is hoping to see overall from the use of Pods.

The organisation is anticipating that people will leave their services with increased independent living skills and that people who are using the Pods can be supported in a less restrictive setting. Heathcotes is also hoping that the Pods will support people to live happy and meaningful lives as independently as they are able.

Over to the experts…

What are the potential risks and barriers with this project? Is it replicable and can the outcomes already seen be reflected elsewhere? How can the project be developed to support more people?

What strikes me about this project is, who would really choose to live in a temporary structure in the garden of a residential service? And why? Faced with the opportunity of space and resources, you have to ask who the Pod idea is really serving?

Heathcotes’ Pod initiative seems to talk about separation and segregation as acceptable norms. Worryingly, Heathcotes suggests the Pods are only for those who are thinking about moving back into the community. Who is commissioning Heathcotes services to keep people out of communities? What is society missing out on because of their exclusion? Everyone has potential for connection, contribution and control – relationships, work and real lives.

The focus of the Pod claims to be on building towards independent living skills and a transition to where people actually want to be. Why not jump the extra step (after all, change is hard) and go straight to what people want? Why not support people to consider what’s important to them, where they would like to be, what skills, attributes and personalities they would like to see in their staff team and build a home and support around what someone wants, rather than what is available?

There remains real concern about the emergence of on-site supported living services. They risk taking the same approaches of residential institutions and hospitals, but with reduced regulation and regulatory oversight. There is a real danger that people will be ‘placed’ temporarily to build skills or independence but will never move on.

As the saying goes, ‘a house is not a home’. A shed in the garden is not independent living.

A great and innovative initiative

The barriers for any project will always be funding and support of the local funding bodies, local authority and clinical commissioning groups, which, in my experience, will often believe they can deliver cheaper care – and more effectively. However, we know that they are too disjointed to offer a full continuing support solution.

The Pods are a great and innovative initiative to promote independence in the learning disability community and offer a one stop support solution, including for young people going through transition. In my experience at The GROW Project, the smallest change in circumstances can be enormously difficult for someone with a learning disability.

The outcomes of the Pods can only be achieved if the correct level of support is provided, which of course would come at a cost. The GROW Project has been successful in providing members with opportunities that promote independence, but the support required is too costly for funding and therefore can result in a loss of choice and opportunity.

Whilst the Pods would work for those that are able to be more independent, my concern would be the outside world once the person has left the relative ‘safety net’ of the pod. There is no question that the Pod initiative will work for the majority, and independent living could be achieved; the failing would be in the community, where people are often ignorant to inclusion, and support requirements rather than promotion of equality.

Maybe the way forward is Pod villages, offering a safe environment to people who have the ability and desire to live independently.

Are they necessary for the individual

Pathways to independence can be difficult to construct and must be tailored to the individual to give them the best possible prospects for leading a full, independent life centred on choice and control.

There are so many variables, not least the property markets in which the ideal homes for people who need support must be found. It can be incredibly difficult to help someone secure the home that they want and need, and any new property options must be welcomed.

The challenge is to make sure that each individual gets to the right living environment for them. Temporary/staged moves may be right for some people but not for others and greater ambition for the person is almost invariably rewarded.

However, it is hard to give a really robust response to Pods without knowing more about the model. For example, I want to know if the Pods come with different fundamentals, such as a fresh staff team, positive behaviour support or changed approaches to communication and family engagement. And what’s the policy on restraint?

If Pods are to be used carefully and conscientiously as part of a constructed pathway on a temporary basis where someone can see their next step, then they may prove to be an innovative use of suitable land and building technology.

However, my real question would be whether they are necessary for the individual. The risk with such devices is that they become the norm and another step in an already complicated, protracted pathway that, for many, could be sidestepped in order that community living can be achieved.

Right support, right care, right culture: Have they got it wrong?

cathy wintersgill (Connect in the North)

I am appalled. I don’t think this is innovative, certainly not in a good way. I think it takes us back in time as if the last 20 years never happened. It will doubtless make money for the provider but I can’t see how it benefits people living in them to be in shed in a garden. What message does that send to those people, their families and the neighbours about what worth we see in people with learning difficulties.