Download eBook
New research has found that 28% of care home operators are at risk of insolvency. Nick Hood explores the financial health of care homes and asks, when will the Government listen?

When the Chancellor closed his Autumn Statement on 23rd November without making any mention of financial help for the embattled social care system, care professionals across the UK were aghast. They deal day-to-day and moment-to-moment with the realities of the financial crisis engulfing the most vulnerable in our society.

They know that every part of the system is at risk of collapse. Increasing numbers of private sector operators are withdrawing from domiciliary care services. The NHS is facing an unprecedented issue with delayed transfers of care, because there is insufficient domiciliary and residential care capacity to deal with patients ready to be discharged from hospital.

Care home operators are refusing to accept local authority funded residents because the fees they will pay are well below the cost of providing care. The larger operators are closing homes on an increasing scale: Four Seasons has closed or sold 51 homes in 2016 and plans to exit a similar number next year. HC-One has disposed of 25 homes this year. The total number of homes in England has fallen from 18,000 in 2010 to 16,600 in July 2016, according to the Care Quality Commission, which is monitoring the situation with understandable concern.

The words of the Four Seasons finance director in their latest quarterly results announcement says it all: they are aiming to have ‘a smaller portfolio of higher performing homes’.

The latest research carried out by Opus Business Services, using the database and analytics of the financial health monitoring specialists Company Watch, reveals precisely why homes are closing. The headline statistic says, ‘Over a quarter of all UK care home operators are so vulnerable that they are at risk of failing or needing a financial rescue.’ This means that some 6,600 care homes could close over the next three years.

Our analysis showed that 1,718 care home operators out of the total of 6,178, whose financial health we analysed, were in the Company Watch warning area, with a financial health rating (H-Score®) of 25 or less out of a maximum of 100. Being in this warning area means that a company is at significant risk of failing. Chart 1 shows the spectrum of the residential care sector’s finances. 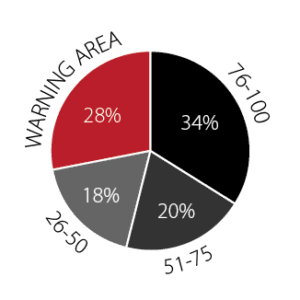 Traditionally, struggling care homes have not ended up in administration or liquidation in significant numbers, because commercial sensitivity to their plight means that there is usually a way to find a consensual solution. Major creditors, such as lenders, have been willing to write-off debt and new operators have been found to take over running the homes, without disturbing the residents. But with the rapidly deteriorating state of the sector’s financial health, such workouts may not be possible in future.

In fact, not only is the overall number of homes falling, but operators’ investment in the sector is declining. This is despite much talk of consolidation into larger operating units as smaller businesses close and the major operators’ talk of committing to bigger and more cost-efficient home profiles. The average gross assets per operator is now £2.47m, compared to £2.62m in March 2014, a drop of almost 6%.

The underlying causes of the sector’s financial malaise are focused in three key areas, the first of which is high gearing. It was a surprise to find that 83% of operators did not borrow at all, while another 2% have borrowings of under £10,000. This may be because the property in which the home is located, and its related debt, is held outside the operating company, or else it may be rented. But those 15% of operators who do carry debt are borrowing far too much – a staggering 121% of their net worth. Overall, the sector has gearing of 80%, a level well outside financial norms. Total debt is £4.5bn, an enormous burden and one which would be well over £5bn if comprehensive financial data for three of the major operators (Four Seasons, HC-One and Barchester) was available.

The next concern is ‘zombie’ operators, whose companies have higher liabilities than the value of their assets – the commercial equivalent of negative equity in your house. There are 751 (12%) operators in this category and between them their net deficits total £671m, a figure which has risen by 53% since March 2014. Chart 2 shows the escalating problem with zombie operators. 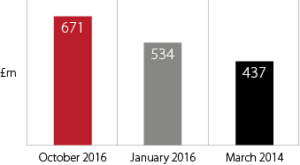 Last, but by no means least, running residential care homes is, at best, a marginally profitable business, and since the introduction of the National Living Wage (NLW) last April, it is now unprofitable for many operators. Our research covers financial data for accounting periods prior to April, when the average annual pre-tax profit per operator was only £34,000 (compared to £40,000 in 2014), equivalent to roughly £10,000 per care home based on an average across the sector of some 3.3 homes per operator. The total profits earned by the sector were only £209m, compared to an estimated increase in annual labour costs from the effect of the NLW of over £400m.

Operators are caught in a pernicious profit pincer movement. Where reliant on local authority contracts, their revenue is inadequate because of downward pressure, over a number of years, on the fees local authorities pay out of ever more restricted care budgets. Their largest cost, labour, has been rising due to the Government’s minimum wage policy. Finally, they face constant pressure from the Care Quality Commission to increase standards.

Unfortunately, this analysis ignores a very large elephant lurking in care home finance departments. Business models are becoming skewed by local authority fee reductions, so that many can only survive by raising the fees of privately-funded residents.

Those homes whose catchment areas have insufficient potential private residents may end up going to the wall – indeed anecdotal evidence suggests that some operators have already started negotiating with local authorities to find new operators for some of their unprofitable homes as an alternative to just closing them. These are also the types of homes being closed by the larger operators. Other operators have simply started refusing to accept any more local authority funded residents on the basis that they lose less money that way.

This is serious enough, but what will happen when privately-funded residents and their relatives finally rebel at having to pay much more for the same service and facilities than the publicly-funded resident sitting next to them? Then the Government will face a systemic threat, which will make the collapse of Southern Cross look like a tea party.

Within our overall analysis of the residential care sector’s finances, there are wide regional variations. Unsurprisingly, average annual profitability is far higher at £93,000 in the South East with its abundance of wealthier private residents than the figure of £19,000 in the North West, as chart 3 shows. 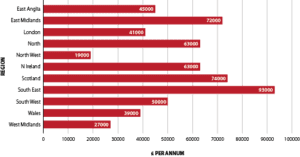 Regional financial health also varies. Scotland has the highest average Company Watch health rating of 62 out of a maximum of 100, while the West and East Midlands have the lowest at 51 each. The full analysis is in Chart 4.

Debt levels are very different around the country. London has the lowest, with an average gearing of only 33%, while Wales has far and away the most extreme gearing at 180%, although this is affected to some extent by the debt at one local operator. 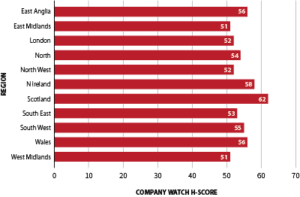 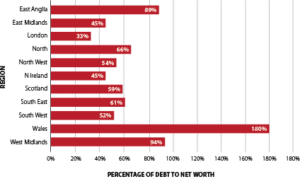 Ultimately, the residential care sector’s problems and its prospects are a function of government policy and its general underfunding of social care. Its policies depress profitability and put severe stresses on operators’ balance sheets, whilst reducing incentives for existing operators to expand or indeed stay in the market at all, and for new players to enter it. This is at a time when demographic realities mean that the UK needs more care home beds, not fewer.

The pressure on the Government to act is intensifying by the day. Is it listening? Judging by the latest announcement of its sticking plaster proposals to allow local authorities to raise council tax to create extra funding for care, it has heard the pleas, but it clearly does not understand the problem.

A one off boost to funding, which will then be clawed back in succeeding years is better than nothing, but it simply kicks the care crisis can a little further down the road when the financial potholes will be even deeper. In any case, it will be woefully inadequate to bridge the huge gap between weekly costs and the fees that are currently being offered for publicly-funded residents.

Is this analysis of the financial health of care homes familiar to you? Log-in to share your thoughts and read the full text of the report into care home finances. Subscription required.