With continuing difficulties in the UK care sector, what is the picture elsewhere? Andrew Larpent, Chairman of CommonAge and a Trustee of The Abbeyfield Society explores the challenges faced by social care systems across the world, and the importance of global knowledge-sharing.

Over recent weeks I have been in a reflective mood as I’ve approached the milestone of 20 years in leadership roles in the care and retirement arenas in the UK and internationally. It has been an important time to take stock of a range of issues, challenges and opportunities faced by professionals and volunteers working with, for and on behalf of older people across the globe. It’s a shrinking world where many common issues challenge governments and societies faced with ageing populations.

In September 2019, I travelled, on behalf of CommonAge, to Toronto for the biennial conference of the Global Ageing Network (GAN), hosted by the Ontario Long Term Care Association. From there I went to India where I was invited to present to the second Seniors Care Conclave in Delhi; a large national conference organised by the Confederation of Indian Industry, HelpAge India and the Association of Senior Living India (ASLI). I also recently attended the annual conference of the UK Association of Retirement Community Operators (ARCO), and an interesting cross-discipline event on the integration of care, housing and health hosted by The King’s Fund in Manchester. Throughout these trips and events, I’ve seen several consistent international themes emerging in the world of ageing and retirement.

Ageing in the Commonwealth

One important thing to note is that there are very few countries that can afford to turn a blind eye to the challenges and opportunities of ageing populations. In 2018, CommonAge, in partnership with the Oxford University Institute for Population Ageing, produced its first research report on Ageing in the Commonwealth.

It found that many of the 53 countries in the Commonwealth have an average population age of under 25, yet population ageing is an issue that goes to the heart of the sustainability agenda for civil societies in all countries.

As an example, the situation for seniors in India – where the median age in 2015 was around 27 years old – is extreme, and it serves to illustrate a far wider international challenge. The numbers are hard to comprehend. In that rapidly-developing country, with a population of 1.3 billion, there are currently 110 million citizens over the age of 60. This number is set to double over the next 20 years.

The massive additional challenge is that 56 million older people in India live in extreme poverty and subsist on the equivalent of under one US dollar per day.

For those who can afford services, India currently has just 10,000 places in care homes or retirement communities against an assessed need of more than 20 times that number. The assessed national challenge is to deliver 300,000 new residential and care places over the next 10 years. In addition, there is a huge unmet demand for homecare services, and for the development of a skilled and accountable workforce. The commercial opportunities and the need for investment are massive. Challenges of a similar nature, but with different numbers, confront many other developing countries.

Challenges in the UK

Here in the UK there is no room for complacency. The care sector talks constantly about the crisis in social care, which successive governments have failed to recognise and address for at least twenty years. We are conscious of a funding crisis in social care services, but less well-publicised are the stark housing statistics that, throughout the UK, 20% of dwellings do not meet basic quality standards, and that large numbers of frail older people in our so-called ‘advanced’ economy live in unsuitable or inappropriate housing.

These are statistics we should all find shocking. They illustrate the stark reality that, across the Commonwealth and the world, the challenges of ageing populations, ageism and age-related inequalities are inadequately recognised and they demand closer attention by governments of all kinds and at all stages of economic ‘development’.

It appears that too many countries are losing sight of traditional familial values, and the basic human right of all older people: to be treated with dignity and respect. The countries doing best are those that recognise the need for informal, community-based support for older people. The famous African proverb, ‘It takes a village to raise a child’ applies equally to the support needs of people in the later stages of life.

The UK experience in this is significant, as the interest amongst older people in downsizing to live in retirement communities is far lower here than in countries of a similar socio-economic make-up. According to ARCO, the percentage of the over-65s who are living in retirement communities in the US, Australia and New Zealand is at or over 5%; in the UK this figure is 0.5%. Retirement villages have yet to make a significant statistical impact in this country despite the energetic efforts of many operators and developers.

Despite these issues, there is evidence of changes taking place in attitudes towards ageing. In developed economies, there are increasing signs of a more holistic approach to the integration of services and support. It is encouraging to note examples of the breaking down of silos in public policy around care, housing and health.

Here in the UK, the integrated Housing to Health project in Nottingham City is offering an important lead that is improving outcomes for older people in that city, as well as saving money for the council and clinical commissioning group.

In other areas, some care providers are working on partnership models with district hospitals to provide innovative solutions to continual pressures in the acute health sector. Across the world in South Australia, there are excellent examples of partnership working between the health and care systems in the Transitional Care model of hospital avoidance and minimisation.

By contrast, rural communities in Cameroon, West Africa have some inspirational examples of community-based projects enabling older people to maintain their independence and dignity. These work through a micro-finance scheme which is funded by grants from the UK Department for International Development.

Meanwhile, in Singapore and Malaysia, we see innovative examples of housing with care models. These examples of best practice in the evolution of service design and delivery must be shared across international borders, and both CommonAge and GAN are committed to this.

The changing nature of care and retirement

At the GAN conference in Canada, there were many examples of innovative housing and service solutions on display from across the world. It was good to see the UK well represented by Vic Rayner, Executive Director of the National Care Forum and Donald Macaskill, Chief Executive of Scottish Care, who together made a major contribution on the theme of promoting a human rights-based approach to dementia.

There is also a discernible international trend in evidence of a move away from 20th century models of institutional care and congregated retirement living, towards more organic and traditional community-based, small-scale housing and social services models. It seems that the 20th century era of the Continuing Care Retirement Communities may be in decline. Many such communities are struggling to attract older people, who are now less willing than their predecessors to move away from their traditional communities into artificial out-of-town retirement communities. The attraction of such projects is increasingly being challenged as a new generation of older people from the baby boomer generation seek to remain as active citizens; still engaged and making contributions to society within integrated, intergenerational communities.

In this respect, during my presentation to the Delhi Conclave, I referred to the UK’s long-established, and under-celebrated, almshouse movement, in which older people remain within their villages and communities in small-scale independent living units, on affordable rents, and supported by their friends and neighbours. Is it time to re-energise and internationalise this great movement?

I was also pleased to highlight the Abbeyfield Movement’s localised, affordable and accessible community housing models. This model of locally-governed, funded and operated housing solutions is designed to counter loneliness and isolation amongst elders.

Inevitably, there is great emphasis, at all national and international conferences, on the important role of technology in care, housing and health systems. It was good to see the GAN Excellence in Ageing Services Award presented to Feros Care for its outstanding work on enabling technologies for elders in Australia.

In India, there is an app for just about everything, and there is a tremendous appetite for web-based technology. Young app entrepreneurs there are working on solutions for seniors’ health, quality of life and lifestyle.

As someone who has enjoyed the rare privilege of working at chief executive level in care and retirement organisations in both the UK and Australia, and as a former director of the International Association of Homes and Services for the Ageing (now renamed GAN) I have developed a strong sense of the power of international knowledge-sharing and collaboration. CommonAge is actively promoting such international partnerships and I would encourage more people working in the UK social care and housing sectors to find ways to study and learn from international experience.

Seek opportunities to learn and share with international colleagues. Otherwise, follow CommonAge on social media, join GAN and allow an international perspective to shape our thinking, our careers, and our approach to the development of 21st century services.

Andrew Larpent is Chairman of CommonAge and a Trustee of The Abbeyfield Society. Email: andrew.larpent@gmail.com Twitter: @ALarpent

Have you seen examples of good practice outside of the UK care system? What are you looking to adopt from other countries? Share your thoughts and feed back on this article.

A Swedish approach to integration

We have a dream 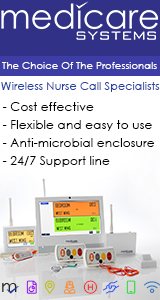