Download eBook
We are living in a climate emergency. What action should care providers take? Danny Sharpe, Co-founder and Director of Northstar, a Specialist Care Home Planning, Design and Project Management consultancy, explains the benefits of sustainable design for the care sector.

The care home industry has traditionally been fairly good at embracing new technologies, including those designed to reduce energy consumption.

This has historically been due, in equal part, to the financial benefits on the one hand and statutory requirements on the other: so, part carrot and part stick. As might be expected of the owner of any building which needs to be kept warm and well lit, care home operators have sought ways to reduce their heating and lighting bills while, at the same time, local planning authorities have insisted that all large, new developments must provide at least 15% of their energy needs from renewable sources.

In the past, we have been able to satisfy both drivers by, for example, designing in heat recovery systems which capture the excess heat from en-suite showers, using this to warm fresh air from the outside and then re-circulating it along communal corridors. This meant less energy was required to heat the home and a constant stream of warm, fresh air circulated throughout the building. By adding a couple of solar panels to the roof to help heat the water to the assisted baths, we comfortably met the 15% requirement and everyone was happy. The care operators could see the benefit because their heating bills were reduced and the planners were happy that it generated some renewable energy.

However, now that we understand the scale of the climate change crisis facing us, this 15% renewables target looks woefully inadequate. The World Green Building Council (WorldGBC) reports that buildings are currently responsible for 39% of all global carbon emissions. 11% of these emissions come from so-called ‘embodied carbon’ – that is the emissions which result from the manufacturing, transportation, construction and end of life phases of a building. The remaining 28% is made up of ‘operational carbon’ or emissions due to heating, lighting and powering our buildings. These emissions trap heat in the atmosphere and prevent it from leaking out into space as part of the earth’s natural cooling system. As the planet heats up, climate change brings more floods, rising sea levels, coastal erosion, forest fires, drought and crop failures leading to food shortages.

The UK Government has made a commitment to tackling climate change and is hosting the COP 26 Summit in November of this year. The Government has also announced a target for net zero carbon emissions by 2050 and plans a 68% reduction in greenhouse gas emissions by 2030, when compared to 1990 levels – a rate faster than any other major economy. Anyone now looking to commission a new care home building needs to take account of these targets and make sure their building will be ‘future proofed’ and in line with both embodied carbon emissions during construction and operational carbon emissions during the running of the building.

The problem comes in that meeting these new standards will require care home developers and operators to buy into a longer ‘payback’ time. What Bill Gates refers to as the ‘Green Premium’ in his book How to Avoid a Climate Disaster is the difference between the cost of carbon-emitting processes and those of zero-carbon alternatives. For example, it is much more expensive initially to install an air source heat pump (ASHP), as opposed to a traditional gas boiler running off mains gas. However, the ASHP will pay for itself after about seven or eight years due to its lower running costs. So, in the long run, it is cheaper to have this cleaner energy source. In the same way, it might take up to 17 or 18 years for solar panels to pay for themselves but, in an industry where the normal commercial lease term is 35 years, this still works out eventually. It needs a change of mindset on the part of those procuring new buildings to realise that this is no longer an ‘either/or’ debate. Fossil fuels, which took millions of years to form, have been used so extensively over the past 200 years that they are due to run out within the next 40 or so years.

The smart care home operators and developers are already taking this into account when commissioning new buildings. Whilst capital costs will be higher initially, the payback period is getting shorter, as evidenced through lower running costs and lower maintenance bills. Having a future-proofed building also gives peace of mind, as these new targets for lower emissions get nearer and nearer. Investors are increasingly looking for buildings that have solid green credentials to enable them to get into new, emerging technologies but also to invest in the type of socially responsible projects their shareholders are increasingly demanding – the added commercial benefit being that they will also meet future standards without a lot of retro-fitting being needed as legislation tightens up.

We recently designed an 80-bed care home for Cornerstone Healthcare Group in Bristol, which has been designed to the highest standard set by the Building Research Establishment Environmental Assessment Method (BREEAM). At concept design stage, we began by orientating the new building to maximise sunlight and daylight to reduce the amount of energy needed for heating during the day. The day rooms and majority of bedrooms have a south and west aspect, whilst the car parking and back of house functions are located on the north-facing side. In developing the designs, we set high standards for the thermal efficiency of the building far in excess of building regulation standards. In other words, the building would use less energy as it would retain heat in the winter and stay cool in the summer for longer. 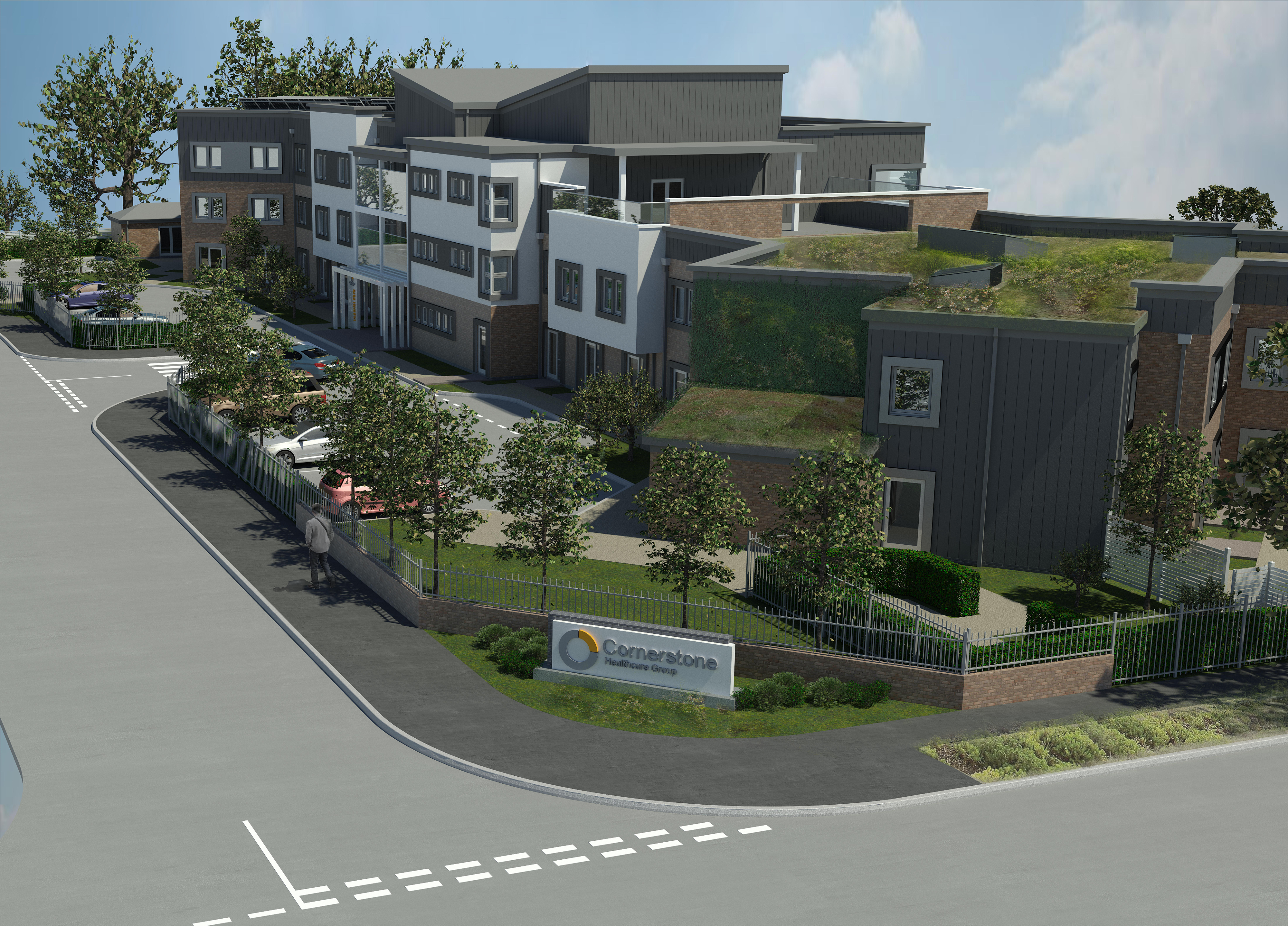 Once we had reduced the amount of non-renewable, fossil fuel energy needed to heat and cool the building, we looked at installing Solar Photovoltaics on the roof to generate electricity, as well as installing ASHPs to work alongside a high-efficiency, gas-fired boiler plant. We then had a Materials Life Cycle assessment carried out. This looked at a range of options for the superstructure and the sub-structure of the building, as well as the landscaping and the heating and cooling systems used.

By looking at the carbon emissions created during the manufacturing of the materials, the transportation to site, the construction process itself, the refurbishment/replacement of materials and the end of life/recycling or disposal phase, we were able to choose the optimum combination for lower carbon emissions. Given that steel and cement manufacturing account for 10% of all greenhouse gas emissions, this can really focus the mind. 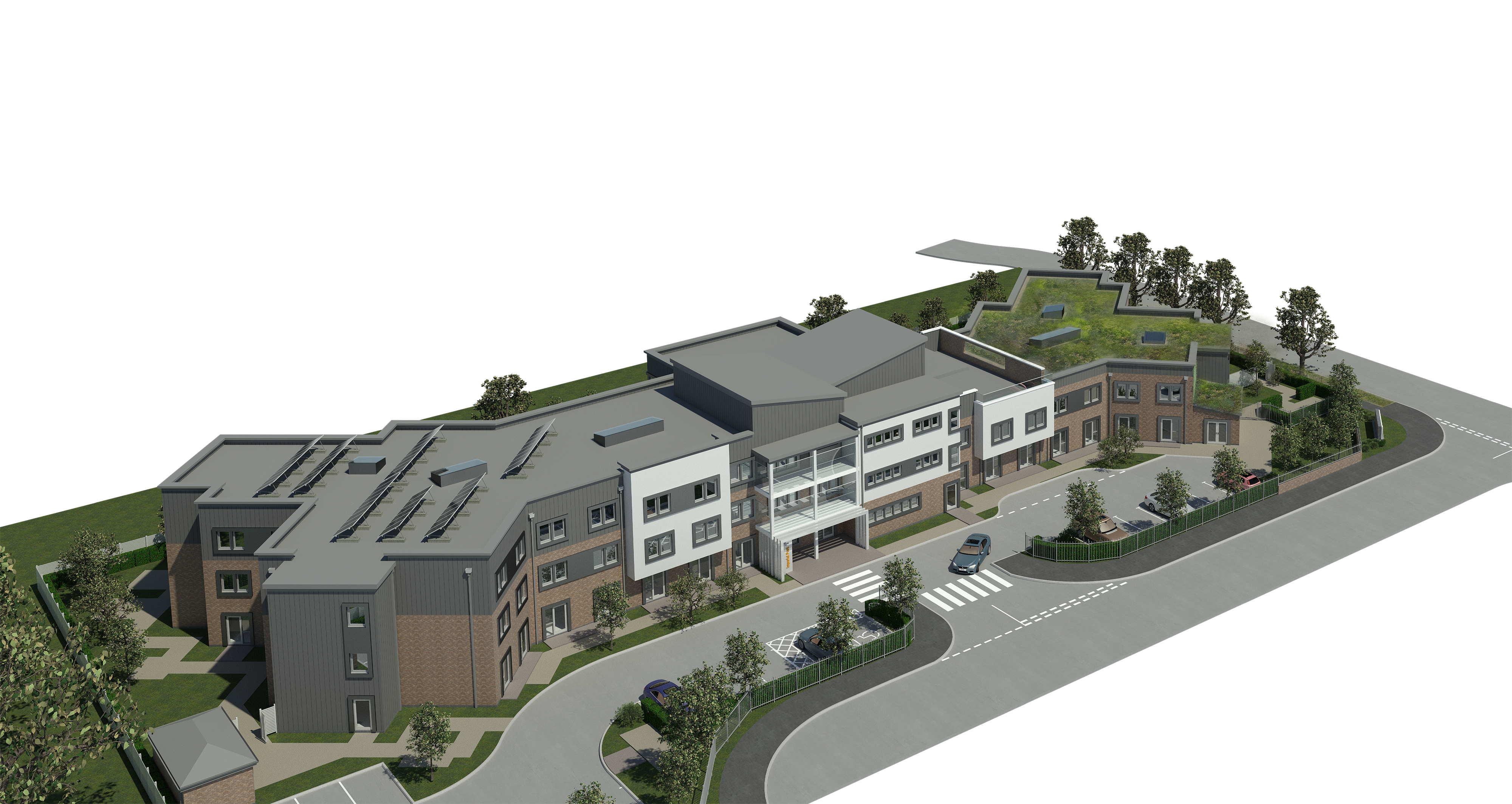 In addition to seeking to reduce carbon emissions, we also need to factor in technologies and strategies for dealing with the already evident impacts of climate change. So, for example, our garden designs now include a much greater proportion of drought-tolerant plants, as well as a large proportion of local plant species to help sustain local insect and wildlife populations. As climate change occurs, local wildlife, whose migration and feeding habits are being severely impacted already by climate change, is under further threat. Our schemes include sustainable drainage strategies to ensure that our developments do not contribute to localised flooding events, which are becoming more prevalent. By restricting the flow of surface water to ‘greenfield’ run-off rates and by installing porous paving, with underground storage tanks to hold and then slowly release rainwater, we can mitigate the impact of our development on its local environment.

There are many local and central Government incentive schemes to replace inefficient gas boilers, upgrade insulation, etc. There are also ‘Feed in Tariff’ schemes to sell excess renewable energy back into the National Grid, to help offset the on-costs of installation. I would suggest readers contact their local authority or local chamber of commerce to see what’s available.

The most sustainable thing of all is to re-use existing buildings. Demolition of buildings, followed by the manufacturing process to create new steel, cement, etc. and then the transportation of all these materials to site all result in huge carbon emissions and would be reduced if we re-used more of our existing building stock.

In designing and building care homes fit for the 21st century, we no longer have the choice of relying on 19th century energy sources. We can no longer opt to simply ignore low carbon technologies and renewable energy production. The good news is that the rate of progress being made to develop new renewable energy sources is making it a real alternative. Good design involves factoring in all these strategies from the outset, rather than trying to retrofit them as after-thoughts. Embracing sustainable design and helping to reduce carbon emissions is not something that needs to add cost in the long run – but it will certainly save money on the life cycle costs and operational running costs of buildings in years to come. Sustainable design is here to stay. It is locked into most Local Plan Policies and smart developers are acting now to embrace these new technologies. Don’t get left behind.

Danny Sharpe is a Co-founder and Director of Northstar. Email: danny@northstar-projects.com Twitter: @dannyrsharpe

Have you made sustainable design improvements to your care setting? Do you think the social care sector has made enough investment to tackle the climate crisis? share your feedback on the feature.

The benefits of good interior design