Download eBook
Patrick Tate highlights the extent to which local authority and self-funded homecare differ, not only geographically but also demographically whilst identifying where opportunities may lie for providers.

The Better Care Fund, announced by the Coalition Government in June 2013, is aimed at joining up NHS and local authority (LA) run services to ensure people receive better, more appropriate care in locations most suited to them. More recently, there has been a pledge to ease the pressure on hospitals by shifting the support element of care into people’s homes.

According to the Local Government Association, the gap between demand and funding for social care is projected to stand at £1.9billion in 2015/16. This means that many people who would benefit from LA provided home care will have to turn to family, friends and voluntary groups to provide care in the home or, for self-funders that have the means, the private home care provider.

The Personal Social Services Research Unit (PSSRU) estimated that for older people, LA funded homecare users will rise 71 per cent between 2010 and 2030 and those who fund their care privately will rise by 106 per cent. This is based on Office for National Statistics (ONS) projections of age and gender and assuming prevalence rates of disability household structure (e.g. marital status, lone person households) remain unchanged.

Both studies highlight the immediate need and the growing expectation for domiciliary care.

LAs including their newly-formed Public Health teams are under increasing pressure to improve their services while reducing costs by efficiently delivering transformation programmes and appropriate, person-centric amenities. These types of efficiencies can only be achieved through migrating the right people towards the right level of supported services.

This provides opportunities for LAs to be more effective and for private enterprise to fulfil a growing need in a market which is currently worth over £1billion per year in England and Wales alone.

A separate study based on data from the English Longitudinal Survey of Ageing estimates the proportion of older people who currently fully fund their homecare is 1.96 per cent.

To understand the size of the market we used our 2014 population forecasts combined with the above study’s age and gender cohorts. Table one shows the top 10 postcode areas by annual self-funding market size. It can be seen that Birmingham (Postcode Area B) with its high population also has the highest number of elderly people who are likely to pay for their own domiciliary care, with Brighton (BN) having the greatest proportion.

Although not shown on the table, Milton Keynes (MK) is set to have the biggest increase, 29 per cent, in self-funders within ten years (given constant propensities by age). 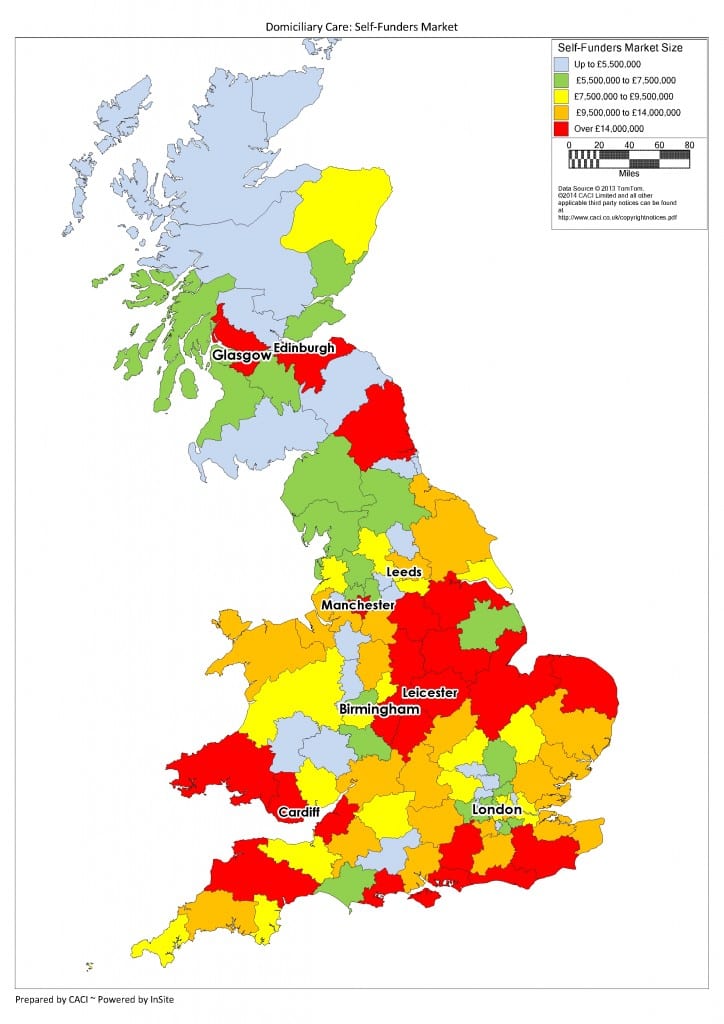 Combining the results of a research piece by PSSRU and recent data releases in National Adult Social Care Intelligence Service (NASCIS) enables us to ascertain the value of self-funders at very small area level, averaging at around £5,000 per user per year. In England and Wales alone, this equates to more than £1billion. This is in contrast to the cost to English LAs, which average £10,000 per person or over £2billion in total.

It is interesting to note the regional variations, with the South West being approximately 9 per cent more expensive than the average and the North West almost 10 per cent less. 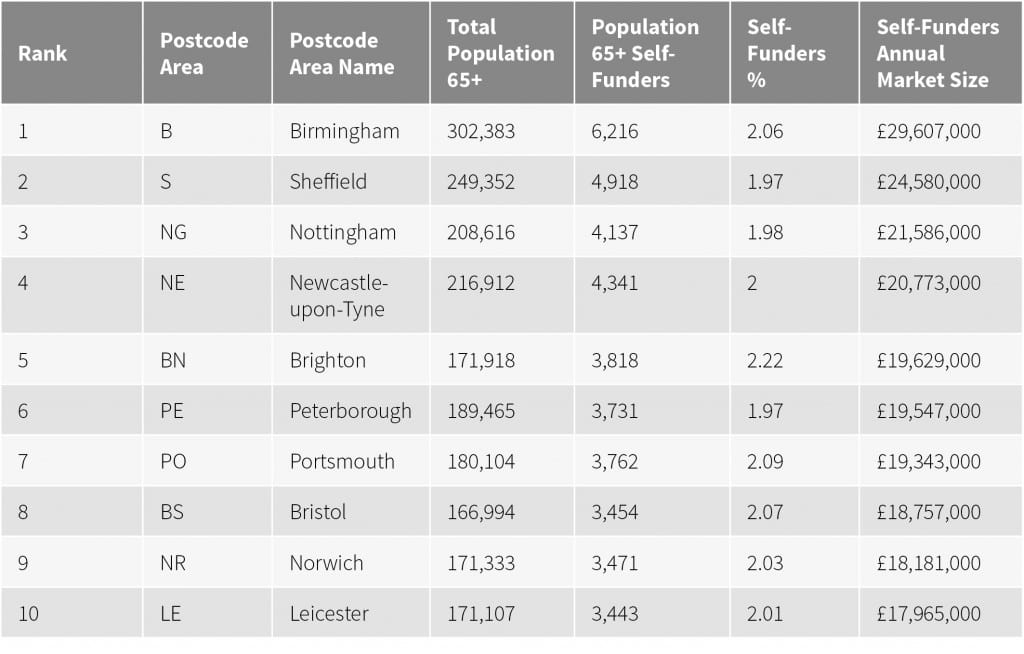 Map one shows where the market for self-funded domiciliary care is likely to be high, according to the proportions of age cohorts amongst elderly people and their respective regions. Whilst some areas may seem obvious in that they either have a large overall population, such as Birmingham, or that they contain many elderly people as is the case along the south coast, there is a concentration of likely spend across the East Midlands and down into south Wales.

Data published by the Health and Social Care Information Centre’s (HSCIC) National Adult Social Care Intelligence Service (NASCIS) gives the number of people aged 65+ who are in receipt of LA-funded homecare and the associated cost. As mentioned above, the average cost to an English LA is about £10,000 per year per user, with approximately 2.2 per cent of the 65+ population using their services. The range of usage across the country is fairly wide, from less than 1 per cent in places like Cheshire East to over 5 per cent in Newham, Lambeth and Tower Hamlets.

The question remains, however, that with the introduction of the Better Care Fund and the diminishing funding of care home places, which of these current users of LA services can be converted to funding their own homecare? Any funding formula provided to each area will inevitably be interpreted differently by each LA, as such the answer may lie in the demographics of those using homecare and whether or not they self-fund.

As the calculation for self-funded homecare spend is based on age cohorts, we are able to assign a value at full postcode level (ie W14 8TT). Using a postcode level geo-demographic classification of the UK population that highlights social factors like wealth, consumer habits and digital behaviour, known as Acorn groups, we can estimate which Acorn groups and types are most likely to self-fund their homecare and how much they are likely to spend. We can also estimate the number of LA service users by Acorn group.

When considering the number of people aged 65 and over who are likely to be self-funders, it is expected that those neighbourhoods with many elderly people would be prevalent. When looking at the Acorn groups, the group classified as ’Poorer Pensioners’ (older people living in social housing with traditional attitudes) and the ‘Comfortable Seniors’ group (empty nester couples in owner-occupied housing) are commonly considered to be potential self-funders. However, these two groups only represent 12 per cent of self-funders and, therefore, only offer limited opportunity.

When looking for opportunities to provide services to self-funders, the larger groups are ‘Executive Wealth’ (families and retired couples in larger properties with above average incomes) and ‘Mature Money’ (suburban and rural neighbourhoods of older empty nesters in high value, high income homes). These alone make up over 25 per cent of self-funders and when applying our spend calculation, the table below shows that their likely spend on homecare is over £268million per year. 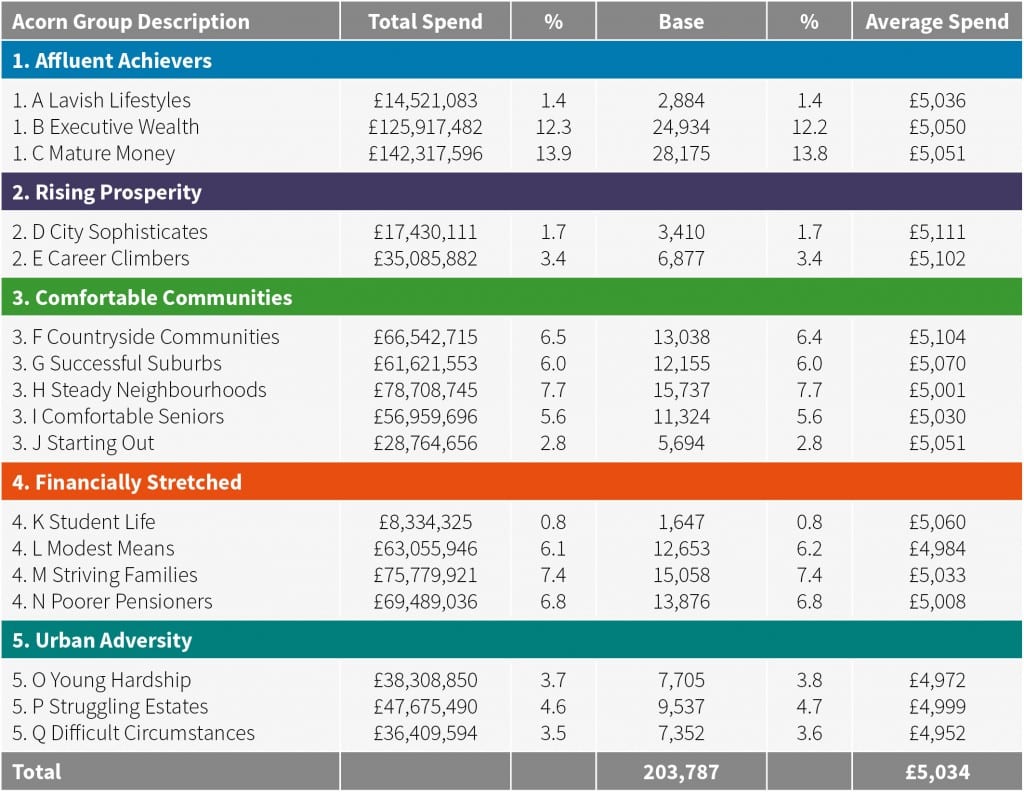 The English data from NASCIS allows us to estimate the distribution of those in receipt of LA-funded homecare by spreading the values across the population of those aged 65 and over. The resultant Acorn profile shows that those in urban and metropolitan areas are more likely to have their homecare funded by their LA.

Just under two per cent of the overall English elderly population live in ‘City Sophisticates’ neighbourhoods (these are neighbourhoods of generally affluent city dwellers living in areas of relatively young professionals), whereas those in receipt of LA-funded homecare in these neighbourhoods are over represented by 50 per cent. The volume of people, however, isn’t particularly high.

Those in the ‘Student Life’ group (areas dominated by students and young people) also over index, containing 24% more elderly LA-funded homecare users than one would expect to find given the distribution of the population aged over 65. This also applies to the ‘Urban Adversity’ category which contain some of the most deprived areas of large and small towns across the country and contains over 14 per cent of the elderly population in receipt of LA-funded homecare compared to just 12 per cent of all over 65 population. However, given the deprived nature of people in these categories, the over representation is to be expected.

As well as being disproportionately over-represented in their usage of LA-funded homecare, the City Sophisticates group also appear to cost more per person than any other Acorn group at over £10,750 per person, whereas the overall average is less than £9,800, a difference of almost £1,000. With an estimate of nearly 5,500 elderly people being funded by their LA, this equates to £5.5million in additional funds being spent in this group alone.

The introduction of the Better Care Fund should allow more people to make their own decisions about their health and social care. However, the Government’s pledge to have more older people remain in their own homes for as long as possible and the diminishing funding for care home places means there are opportunities for LAs to manage their integrated care resources better and for private elderly care businesses to direct their commercial activities to those that are able to self-fund.

The Acorn analysis presented here shows a clear opportunity for LAs to allocate funding to those who are most in need. The elderly population within the ‘City Sophisticates’ Acorn group costs a disproportionate amount of money to LAs. Even though it only represents approximately 5,500 people, the total cost for homecare is estimated to be in excess of £59million.

Similarly the ‘Executive Wealth’ and ‘Mature Money’ groups between them are estimated to cost over £500million. These particular groups make up some of the wealthiest neighbourhoods in the country and represent a significant opportunity for private enterprise to provide alternative, self-funded homecare.

A simple comparison of the Acorn profiles of those in receipt of LA-funded homecare and those who self-fund shows how over represented the ‘City Sophisticates’ group are in the LA funded cohort. At the same time, ‘Poorer Pensioners’ are tending to self-fund, but to a lesser degree.

Identifying these neighbourhoods and ascertaining the appropriate funding for their homecare will not only save money within the integrated care provided through the Better Care Fund, but also provide commercial opportunities for private enterprise.

For more information on this and Acorn visit: http://acorn.caci.co.uk

Subscribers can access the full version or add to the debate on the homecare market. Subscription required.