Download eBook
While reform has been promised to social care for decades, we are still operating in a system that is outdated and which fails to keep up with changing demand. John Kennedy, Social Care Consultant, tells us where we are going wrong and puts forward ideas for radical change.

The awaited Green Paper has failed to materialise again. We’ve been talking about reform in adult social care all my working life, and, while things have been tough in the past, it now seems like we really are staring into the abyss. Social care seems never important enough to be high on the political agenda.

There are approximately 1.4 million people in England today over the age of 85 and, by my 85th birthday in 2051, there may well be 4.5 million of us. It’s unprecedented and a game-changer.

Looking more broadly at adult social care, it’s estimated that 1.4 million people are now excluded from receiving the care they need and that they used to get. The NHS is under relentless overwhelming pressure, partly because of a poorly-imagined social care system failing to respond to the failure demand embedded in the current approach.

The recent State of Care report, published by the Care Quality Commission (CQC), paints a grim view of the state of adult social care. We have passed the ‘tipping point’ and it’s official: social care is collapsing in slow motion. But all this has been known for years – the collapse was wholly predictable.

Hurdles for innovation and change

The public’s expectations about the kind of care they should, and want to, receive, not to mention its quality, are also changing. We’ve changed immeasurably as a society and will continue to. Older people are no longer ‘Victorians’, as they were when I started off 35 years ago. They are now the pioneers of a consumer society. They’ve given us good coffee and en-suite hotel rooms, they’ve exercised their consumer power and created new markets, products and opportunities. So why is the way we care so poorly envisioned?

Why, I reflect, have we been left behind while other sectors have moved on? The bleeper I had in the 1980s has evolved into a smartphone – if you’d given me a smartphone when I was a kid, I’d have thought I was an extra in Star Wars. Why isn’t our care system equally as unrecognisable?

Instead of responding to changing demand, we’re simply entrenching what we don’t desire. No-one wants domiciliary care that operates to a ‘pizza delivery’ model. The current system focuses more on ‘time slots’ and ‘logistics’ than creating the right conditions that allow empathy and kindness to grow. No-one wants ever-bigger care homes or industrial models of care, but we are being pushed in this direction.

Before I get trolled for dissing social care, I’m not. I know of fabulous places and fabulous people doing incredible things. But it’s not consistent or common. Far more want to be fabulous, and far more could be if the engineering of the system were improved and nurtured.

CQC is right to say that good care is everyone’s responsibility; no-one should expect a regulator to be the sole agent of quality. However, slightly ironically, its approach has led to CQC shouldering all the responsibility for the quality of social care services in the eyes of not only the public, but also Government and, to a significant degree, providers, whose activities are dominated by the ever-changing ‘angels on pinheads’ requirements.

This shouldering of responsibility has made CQC the most powerful and influential agent in social care. It has the power to create the right environment for progress, and it has the power to fetter. But CQC is also trapped in the circular firing squad of blame, fearful of encouraging anything outside of the norm.

This fear of upsetting the balance and trying something new dominates the culture in social care. The vast majority of providers want to do a good job every day and the vast majority of care workers want to be kind. But in the current system, even some of the very best remain worried to try new things, boxed in by an apparently rigid and unyielding system.

The link with quality

It’s not working either – quality is not being improved commonly and consistently. Quarter on quarter, inspections report approximately 50% of care homes are below expected standards, and we aren’t resolving this, we are just playing whack-a-mole. 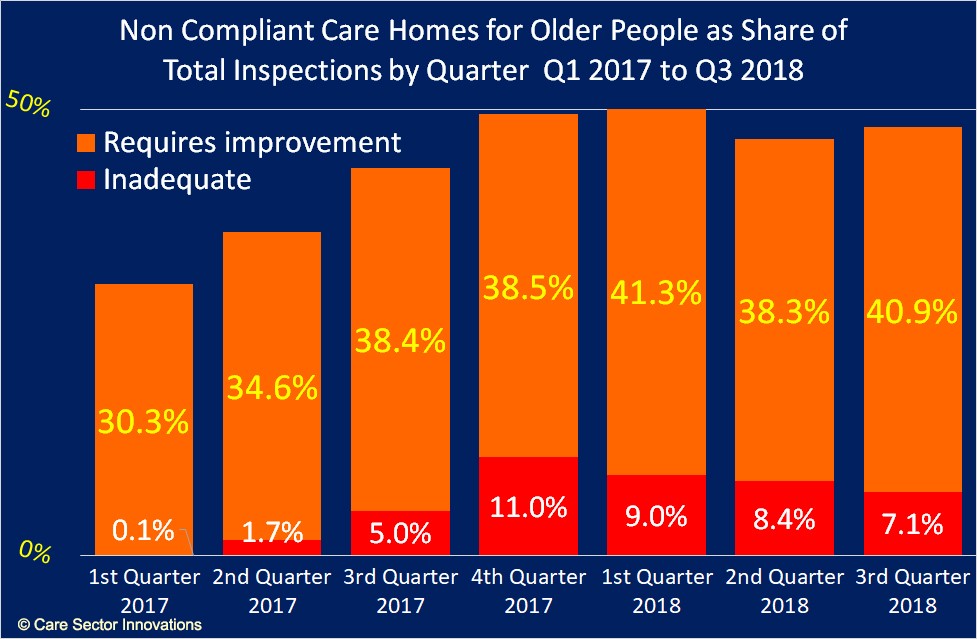 A recent report from The King’s Fund on the impact of regulation highlighted that a focus on inspection and ratings wasn’t having the anticipated impact on systemic quality in social care. Strikingly, the researchers did note the positive impact of a good relationship between inspector and inspected, but we now understand that this more nurturing approach is evident in the health sector, and is more or less non-existent in social care.

It will get worse

The ‘crisis’ is officially upon us. But without radical reimagining it’s only going to get worse.
Providers are increasingly struggling to find people to fill permanent senior roles, particularly registered manager positions. These roles are proven to be the most crucial factor in the quality of a care service. Increasingly, people are unwilling to shoulder the significant legal and reputational risk that these roles bring with them. Burn-out and mental distress are also endemic and, for women, the highest occupational risk for suicide is care work.

Good, long-term and responsible investment is being discouraged. Investors are reluctant to have line of sight from their boards to registered care provision, for fear of litigation and reputational damage. This increases the risk that any investment that is forthcoming is aggressive, short-term and profit-driven.

There is a very high turnover rate for new entrants to the care sector and a particular increase in difficulty recruiting and retaining younger people. The needs of the next generation of care workers could be very different – will they accept the dissonant value base of the sector? We must recognise that tomorrow’s workforce might not want ‘the work’ as it stands. Do we need a workforce recruitment drive? Or do we need to imagine a different kind of ‘work’? 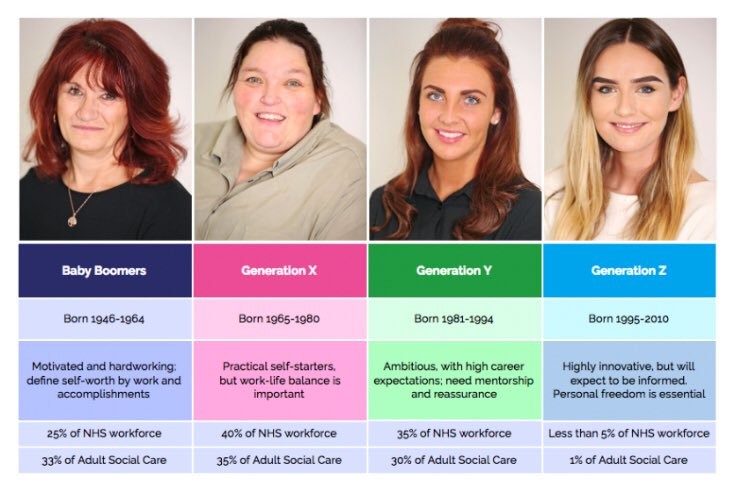 The care system is failing everyone: citizens, workers and society. Yes, more money would help, but it won’t solve our problems in itself.

We need to shift the power so that consumers are in charge, not commissioners. Our language needs to shift – let’s stop thinking of ‘services’ and ‘service users’ and start calling it what it is – community and neighbourhood, friends, neighbours and people. Informal carers, the bedrock of social care, must be supported and valued, where they are often ignored and disempowered. And our workforce needs to be professional, well-paid and well-valued.

But until the system allows change, we will be stuck in a Victorian world.

In the absence of Government taking responsibility, someone needs to step-up and lead, and I can’t think of any other agency, with the resources and power able to do that, than the regulator.

Perhaps we could reimagine regulation so that it has ‘skin in the game’. CQC could work to support innovation, sharing the risk with providers to permit, enable, encourage and breed confidence, so that providers know they won’t be penalised for trying something new. Integral to this will be to have at least one person on the CQC board who has contemporary experience of working in adult social care.

Data and evidence could be used to expose the impact of poor commissioning. Only by proving the direct correlation between poor quality and shoestring commissioning will change be brought about.

We also need to forensically and inquisitively examine and evaluate the bureaucracy – ensure that what is demanded of all care workers is effective and actively helps quality. It mustn’t unnecessarily take away the time to care. What if we moved to a SMART and evidence-based regulatory model? Could we bring a stop to the pettifogging culture?

The sector needs to speak truth to power, loudly and courageously. CQC is one of the only agents in the space with a voice that can be heard across both providers and Government and that has the ability to bring about change on a fundamental level, but it must change itself first.

Like it or not, CQC could in many ways be our Obi Wan. In other words, our only hope. We must reimagine – the alternative is to fail while waiting for reform and watch the sector collapse.

John Kennedy is Independent Social Care Consultant and Commentator. He is the author of the John Kennedy Care Home Inquiry and Co-Author of ‘Power to People: proposals to reboot adult care and support in NI’. Email: jpkennedy366@gmail.com Twitter: @johnnycosmos

Into Perspective: Are retirement communities the future of social care?

Projections for the decade ahead

From the ground up

While I agree broadly with the direction of the article I think it misses the commissioners role in the innovation cycle. it is no point the inspectorate encouraging change if the local authorities don’t also embrace the opportunity, there is to much can’t do rather than can do attitude prevalent through our social service departments. I have been involved with representing social care providers across 3 authorities and often real alternative approaches have been tabled only to be later dismissed in the framing of contracts and budgets. The system isn’t just broke the participants are frozen in terror not wanting… Read more »

Thank you Stephen. Yes I agree completely I should have made reference to the inflexibility of commissioning too. I suppose my thinking is that the regulator has the power to give ‘freedom’ to warm up the ‘frozen in terror’. Grateful for your thoughts. John

John Kennedy that’s a really good article because it finally goes to the heart of the problems of our health and social care system. So much of the time, each element of the system; CQC, county councils, etc all seem to stand around not recognising the responsibility they all have to highlight the flaws in the system as a whole. CQC is in a prime place to make a real difference to the current broken system. They also go into those organisations and see the root cause of the problems and systemic barriers that cause the system to behave the… Read more »

Dear John, Thank you for this thoughtful response. I agree courage is required it’s so much easier to stand on the sidelines ‘judging’ than it is to get stuck in. I’m going to look at Griffiths again! John