Stuck in the spiral: How to avoid toxic workplace cultures

Download eBook
With staff vacancy rates rocketing and burnout becoming increasingly common, human resources (HR) specialist Cath Dixon created a model to explain how the culture of our care workplaces is changing and shares her advice on how to combat toxic cultures.

Until three years ago, I was the only HR professional supporting approximately 700 staff for a charity with ten care homes. The ten homes had initially been run as ten different businesses but, following several changes in the leadership team, we started working towards having one single, corporate approach.

To begin with all went well, but then we noticed that new documentation, new processes and ways of working just weren’t sticking and people were referring back to what they had always done. We started performance-managing people, telling them what they had to do and checking that they did it. Around the same time, we started to notice that staff turnover was increasing and it was becoming harder to recruit new staff; a few months on, we noticed that turnover among new starters was a large part of our turnover problem and, in the homes where staff turnover was at its worst, we were also increasingly having problems with occupancy too. It was then that I started to join the dots and created the first draft of what became my Care Culture Spiral model.

Let’s start by looking at the type of people who are drawn to working in care; none of us is here for the money! People are drawn to care as a vocation – they work in care because they care; they’re also probably caring for children, older parents and/or neighbours as well as being the go-to person for tea and sympathy amongst their friends and family. Very simply, they are prone to put themselves last. They’re also likely to be a Green personality type on the Insights Colour Wheel , who want to be liked, to maintain harmony and who fear confrontation. If this isn’t true for you, then it’s likely to be true for the majority of people who form your senior team. When under pressure, these people tend to just work harder or longer because they don’t want to let anyone down and, because they put themselves last, they end up on the road to burnout.

The road to burnout can be long and winding and, if you don’t stop and take care of yourself, the destination is inevitable. As a manager on that road, it’s very easy to slip into the parent/child ego state rather than adult/adult (Transactional Analysis, Eric Berne), which leads to a range of communication problems including the Drama Triangle (Stephen Karpman), where we switch between the roles of persecutor, victim and rescuer.

Before we realise it, we’ve developed a dictatorial leadership style that relies on employees following instructions and, without realising, we’re disempowering staff from making their own decisions – what did you want me to do with Mrs Smith? Do I need to do this with Mr Jones? Ever felt like your staff don’t think for themselves?

Maybe we’ve left them with no alternative but to ask questions; remember, these are Green people who want to please you by getting it right. They want to avoid the conflict that occurs when they get it wrong and they don’t want to be blamed.

If this doesn’t sound like somewhere you’d want to work, then it’s no surprise that some staff won’t stay. Some will stay, though, and they’ll fit into two groups: your best staff who are staying because they love the people they are caring for and are staying for them, and your worst staff who are staying because it’s less hassle than trying to get a new job. However, you have been able to recruit, so I’m sure it will be OK, except those new recruits are being pulled from pillar to post working the shifts your existing staff don’t want to cover. Or they’re being pushed from household to household and not getting the chance to form relationships with people, staff and residents alike. Or they’re working alongside your worst staff who are watching your new recruits implement their learning from induction training only to tell them, ‘That’s not how we do it here!’ So, your new Green recruits who want to be liked and want to do the right thing have a choice: 1) conform to bad habits, 2) report their new team mates, 3) get their head down and ignore it or 4) leave. You’re now seeing an increase in new staff turnover, too.

With gaps in the roster, you have no choice but to fill with agency staff unless you ask your best Green staff to work harder and longer, which they will do of course because they love the people they care for and want to please you. However, they can’t cover everything and so standards start to become inconsistent. Because our senior people are predominately Green too, they avoid having difficult conversations with the staff who are responsible for poorer standards and, by default, the team has started to tolerate the poorer standards, as they feel there is no point in reporting them as nothing gets done, unless it’s something that can’t be ignored.

Inevitably, a medication error or other omission will be identified. You’ll investigate and it is everyone’s fault but no one will take personal accountability for their part.

We’ve now got a not insignificant number of staff who have fallen into bad habits; who don’t like working with new staff because they are too slow; who form cliques and gossip; who don’t take personal responsibility and who stay with you because they get to have a laugh with their mates (because somehow, they are always rostered and allocated together). They are supported by a group of Green followers, who want to be liked by their colleagues so tolerate their bitching and bad habits. Maybe they’ve been tolerating other undesirable behaviours too, because now you’ve had an increase in reportable incidents, potential safeguarding issues and disciplinaries. Meanwhile, your best staff continue to work harder and longer.

And so starts the spiral, with standards, tolerance and behaviours becoming increasingly toxic. And that’s before COVID-19. Because of the nature of people who choose to work in care, combined with chronic underfunding and the lack of leadership development, I believe the sector has always been a ripe breeding ground for overwhelmed home managers and a propensity to spiral towards a toxic culture. COVID-19 has just sped up the process. Stuck in the spiral?

Here are some steps you can take to reverse it:

Go back and get some organisational clarity – revisit and review your mission, vision, values and behaviours. Ensure that your business strategy outlines the steps you are taking towards the vision, when and how, and support this with organisational objectives and goals that measure your progress in delivering your strategy.

Ensure your key people are aligned behind this strategy, that they all agree that the priorities you are working on are absolutely the right priorities to be focusing on now to take you the next step closer to your vision. You need to be confident that your key people will give the same response, regardless of whether you are within earshot or not.

Create safe places using some team conditions – your staff know what the problems are and how to resolve them; ensure they have the opportunity to tell you (and others who need to know) by creating some rules around how you will communicate with each other. Some examples of team conditions include:

It’s up to you and your teams to agree what conditions you need in your workplace, what those conditions look like in practice and how you will hold each other to account when the conditions aren’t being adhered to. A great place to start for team conditions is The Collaborative Way.

Identify and address hot spots – bring your mixed teams together to discuss what works and what doesn’t within the home. It’s essential to practise the team conditions during these discussions, to role model the behaviours and values you expect and to support, encourage and remind those who don’t.

Invest in leadership and personal development – your leaders are not always people in a position of authority but they will always be role models. Focus your leadership development on softer skills like communication, having a growth mindset and role-modelling behaviours that are aligned with values. Create sessions on a sliding scale for everyone, from yourself through to front-line staff.

Don’t underestimate the importance of following the steps in order; you can’t align your key people behind a strategy that is not clear and you can’t expect your team to engage in constructive debate if you’ve not set some ground rules. 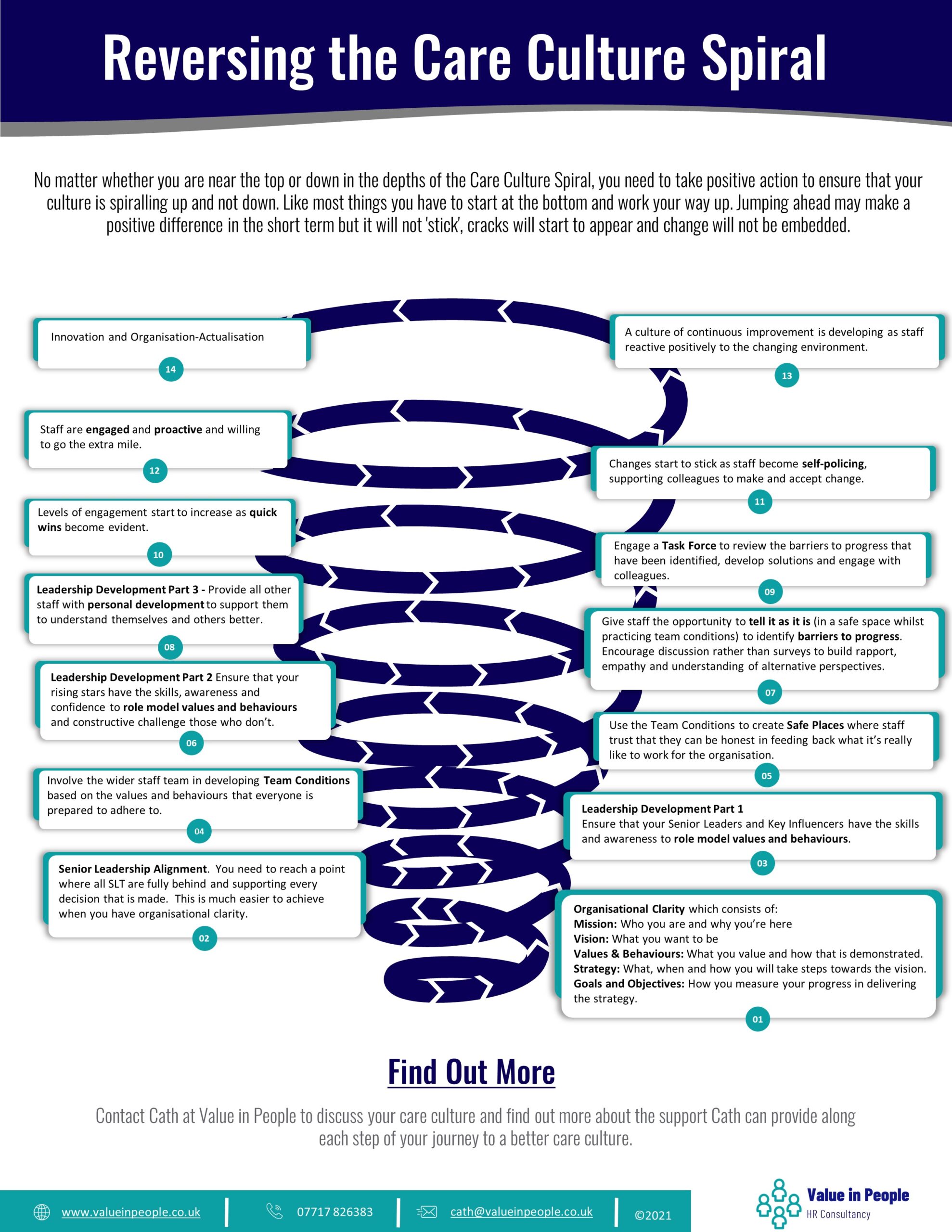 Cath Dixon is an independent HR specialist working in the social care sector. If you think your home has spiralled into a toxic culture, then Cath is available to support you with a culture change programme to reverse the spiral. Email: cath@valueinpeople.co.uk

Do you recognise some of the behaviours and cultures discussed? share your feedback on the article.

Breaking the cycle: Invest more time in recruitment and adopt a values-based approach

Into Perspective: How will the new immigration policy impact on social care?