The reality of the domiciliary care financial crisis

Download eBook
Nick Hood shares his research into the financial health of the homecare sector.

The impact of resource constraints was set out for all to see. There were tales of social care recruitment and staff retention issues and warnings of worse times to come from local authorities and other organisations, including the United Kingdom Homecare Association.

With the support of financial health monitoring specialists, Company Watch, Opus had worked closely with the producers of the Panorama programme for six months prior to it being broadcast, providing them with statistics on the sector. This was essentially the financial bedrock on which the programme rested.

The headline-grabbing point we made was that over one in four (27% in fact) of all the homecare providers in the UK are at serious risk of failure. This is a threat, which has systemic implications, not just for domiciliary care, but for the whole care system.

As the care industry is well aware, but as successive governments have seemed unable to grasp, the various sub-sectors of health and social care are interwoven in a complex web of interdependency. If domiciliary care is not available for the elderly and vulnerable, this puts pressure on NHS resources, including A&E admissions and delayed transfers of care. Added to that, it also stresses the residential care sector, which is in the grips of a very similar crisis, both in terms of capacity and finances.

This illustrates one of the most serious problems underlying the current situation: the existence of entrenched silos within the system. The NHS, domiciliary care providers, care home operators and their paymasters in local and central government can all be driven by their own agendas and guard their independent budgets.

How else has a situation been allowed to develop where, as pointed out so eloquently on BBC Radio 4 recently by the Chief Executive of Mears, local authorities squeeze domiciliary care fees, when this is by far the cheapest way of caring for the elderly and vulnerable? The weekly cost is significantly below that for a residential care place and a fraction of the cost of an NHS bed.

Equally, why is it acceptable that home care providers should invest time and money to train care staff, only to see them poached by nearby NHS hospitals?

The outcome is a domiciliary care sector at risk and in danger of collapse, according to many pundits, and one which astoundingly loses an average of £11.66 per client per year on its estimated 900,000 clients, based on the latest financial information available.

Our original research for Panorama covered the accounts of some 2,600 companies, which tell Companies House that they provide non-residential care services.

Subsequent to the programme’s transmission, we expanded the sample to include the latest financial information for three major national domiciliary care providers, who had not previously been included because their official business description was not within this definition.

Profitability – or the lack of it

The average domiciliary care provider makes a post-tax loss of £4,000 per year. Eliminating the three national operators from this calculation, the smaller operators were marginally profitable, earning a tiny profit after tax of £6,000 a year, a 40% drop from the previous year, when the average was a profit of £10,000 per annum.

Overall, one in eight providers showed a loss in its latest accounts.

The latest annual pre-tax losses for the sector total £10.5m. Because of the delay in filing accounts at Companies House, these figures do not yet reflect the effect of the introduction of the National Living Wage, which will add materially to the sector’s losses.

In addition, an employment tribunal ruling in 2014 has created a further significant burden by confirming that staff sleeping overnight at clients’ houses must be paid the National Living Wage for every hour in their ‘sleep-in’ shift, rather than the lower flat rate shift allowance commonly used in the sector.

Between them, these two factors will add several hundred million pounds to the cost base of a sector which employs some 650,000 people and is battling just to preserve its revenues, never mind increase them to cover this huge extra burden.

Our analysis has been carried out using the Company Watch methodology, which allocates a financial health score (H-Score®) out of a maximum of 100. This is derived from the analysis of a homecare company’s published financial results. Companies with an H-Score of 25 or less are placed in what is known as the Warning Area.

The spectrum of health scores across the domiciliary care sector can be illustrated by Chart 1. It can be seen that while 55% of companies have an H-Score of 51 or higher and 37% are in the highest bracket, 27% sit in the warning area. 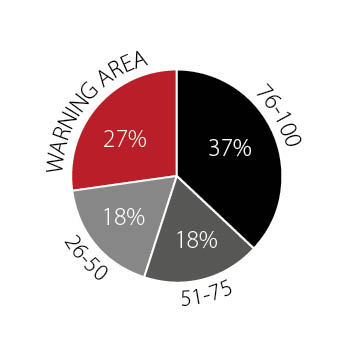 A zombie company is one with total liabilities that exceed its total assets in its latest published accounts, making it technically insolvent. As such, it continues to operate with the agreement (tacit or otherwise) of its creditors. Based on our research, there are 294 domiciliary providers in the UK that fit this definition, amounting to 11% of the total. Their total ‘negative equity’ was £38m.

The average net worth of domiciliary care providers is only £314,000, confirming how small the players in the homecare sector are. This makes them particularly vulnerable to pricing pressures from local authorities. They are also likely to have limited reserves to withstand any sustained losses.

Average gross assets are also reducing, indicating lower investment in the homecare sector. The average total assets per operator is now £538,000, compared to £625,000 a year ago, a drop of 14%.

We also looked at the differences between different regions of the UK and especially at how overall financial health varied. Northern Ireland has the most financially secure providers with an average H-Score of 73, while the North West has the lowest average H-Score of 48.

Worryingly, the three national chains in our sample are the weakest, with an average H-Score of just 34. The comparative average Company Watch H-Score per region is in Chart 2. 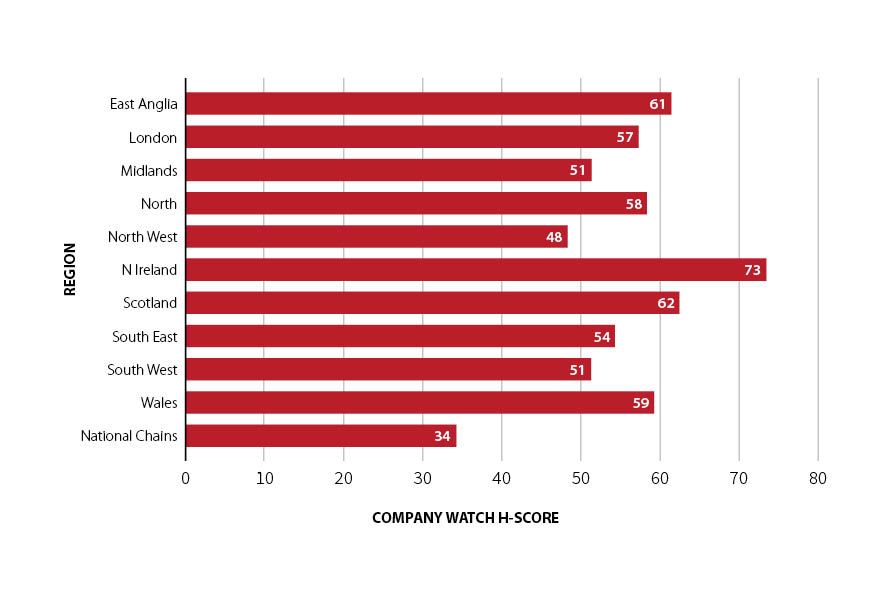 The South West has the highest percentage of providers (36%) in the Company Watch Warning Area, followed closely by the North West with 34% at risk of insolvency. Unsurprisingly, these two regions also had the most zombie companies, 17% in the South West and 15% in the North West.

The overall financial picture of the UK’s domiciliary care sector is one of negligible or negative profitability. Too many homecare providers are in a vulnerable financial position and there is a worrying number of ‘zombie’ companies. Some of the regional variations are also a matter of concern.

Pressure will inevitably mount for more capacity within the sector to deal with the predicted rise in the number of people needing care, as the Baby Boomer demographic spike plays out.

Equally, the parallel financial crisis in residential care and the NHS can only have the effect of increasing the demand for homecare for those needing care and support.

Additional public funding for social care was announced in last month’s Spring Budget, but many care experts have dismissed this as too little and far too late, a view we share. Even then, the domiciliary care sector may miss out on its fair share of this sticking plaster solution, as it competes with residential care and NHS care-related services for this funding.

The parlous state of finances in the domiciliary sector were highlighted in March, when one of the largest providers in the South West, Cleeve Link Homecare went into liquidation. This left local authorities struggling to find alternative providers for almost 500 elderly and vulnerable clients. Our research suggests that many more home care providers may suffer the same fate.

Insolvency apart, the parallel risk is that more and more domiciliary providers will simply leave the market altogether because the returns available do not justify the risk, compounding what is already sustained pressure on all aspects of social care.

Our research uncovered 69 homecare providers who had simply shut up shop in the three-month period up to February 2017. Sadly, this worrying trickle has every chance of becoming a flood, leaving significant numbers of the sector’s 900,000 clients without a social care package.

Is this really what a civilised society, or any government representing it, should contemplate?     CMM

CMM subscribers can also read Nick’s report on the financial health of care homes, published in CMM in February.